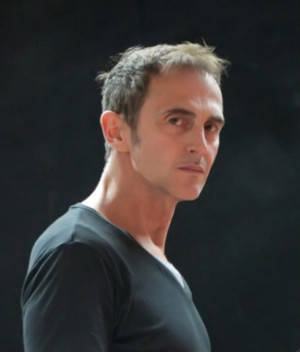 BOTTOM LINE: A window into the bizarre and vulnerable workings of an artist’s mind, accompanied by superb songs, great use of multi-media and lots of Caravaggio.

I have rarely seen multi-media put to such good use as in The Escape Artist, the latest production at Performance Space 122 by the multi-talented John Kelly. There is an admiring simplicity to this piece: three plain screens project a mix of pre-recorded visuals and live footage of Kelly’s face, providing a vivid and enthralling account of an artist’s delirious journey through his own mind as he struggles with the despair and uncertainty of an almost fatal injury.

The play follows the life of a young trapeze artist who has discovered the beauty of the paintings of the Baroque artist Caravaggio, and finds himself compelled to render homage to the Italian genius via the acrobatics of the trapeze. While in training, he has a catastrophic fall in which he almost breaks his neck and is rushed off to hospital. There, in a semi-conscious state, he spends 15 hours while the doctors try to find out the consequences of his injury. The play focuses on the anguish of these 15 hours, with Kelly spending most of the time immobilized and lying face up on a table. Meanwhile, a camera on the ceiling projects live footage of his face onto the central screen, with Kelly’s facial expressions evocatively portraying pain, vulnerability and confusion. This created a strong sense of empathy for the character, which kept me emotionally invested in his plight from the beginning.

As the young artist slips in and out of consciousness, we are presented with his dreams and deliberations, given life by the songs and visuals presented on the side screens. Frustration, boredom, anger, sexual passion all occupy a role at some point or other in these dreams, as does the inevitable analysis of his own life and the reminder of the unrelenting hardships of the urban artist, who “work every day but never get paid.” The other component to these dreams is the world of Caravaggio, which is mainly comprised by the characters from his paintings brought to life on the screen by pre-taped actors. The scenes are recreated using the wonderful lighting effects which are so familiar in Caravaggio’s paintings (get those art history books out!), and if you can remember that Caravaggio exhibition you saw as a child, it’s actually quite fun to try and recognize the paintings. If, however, you are a bit of an art buff and have nurtured a real appreciation of Caravaggio’s work, the strongly homoerotic representations may come across as somewhat irreverent to the work of the master.

Now, if you are suspecting that a piece that narrates the dreams of a young vulnerable artist is bound to have a strong component of the bizarre, you would, in this case, be absolutely right. Although the dreams and their underlying topics do give a sense of accompanying the artist on a journey, the lyrics and visuals are often largely abstract and I did feel that my interest started to dwindle with the last few songs. While the songs themselves are quite catchy (most were composed by Kelly himself together with Carol Lipnik), the singing was mixed at times, although I’m happy to give him some slack as he delivered most of the songs lying face up on a wooden table.

This play is very entertaining due to its tragic theme, the creative use of multimedia and the catchy songs, which far outweigh the play’s somewhat lacking narrative and the occassionally overly abstract dreams. The Escape Artist is perfect for something creative and truly different in the New York theatre scene.