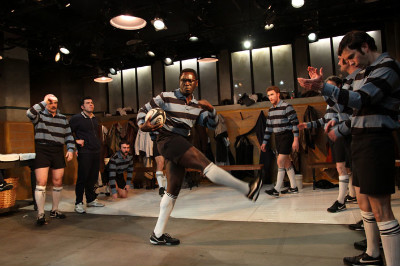 Leajato Amara Robinson and the cast of The Changing Room. Photo by Daniel Terna.

BOTTOM LINE: A solid production of a rarely produced play that shows a brief glimpse into the lives of a Northern England semi-pro rugby team during the course of a single game.

The Changing Room is an extremely intimate documentary drama that follows the lives of several working class athletes’ pre- and post-game rituals as they compete in an ordinary game of rugby. The play premiered on Broadway in 1973 and was nominated for four Tony Awards including Best Play. The audience is given a rare look into the lives of these simple people as they struggle with the obstacles of everyday life. It’s sometimes said that theatre cannot be about the ordinary, but that does not apply to The Changing Room. What makes it so great is that it is about just that, the ordinary lives of ordinary men. It a true “slice of life” where it’s not about playing the game, or even who wins the game, it is truly about the relationships of these men and how they interact when their guards are totally down in the most sacred of places, the changing room.

While there isn’t a really a “plot” per say, the actors nonetheless, go after the scenes with fearless abandon and provide a collection of extremely lush and vivid characters that are immensely relatable and incredibly interesting to watch. You literally feel like you are spying on an hour and half of these men’s lives. You see every detail of what goes on before during and after a typical rugby game, which does obviously, as the title suggest changing for the game. Now, it could have easily become a play about the nudity, but Mr. Schreiber made the astute choice to make it completely tasteful. There is rarely even a moment that the audience notices that anyone is even nude. This is also a testament to the fine acting ensemble that make such a non-issue of the required nudity that the audience is not distracted or taken out of the action of the play. I really cannot say enough about the level of acting in the piece. It truly is an ensemble piece of theatre in every sense of the word and makes it nearly impossible to single out any particular performance over the other. The men create a “team” atmosphere where every performer is unabashedly supporting the other actors on stage. They even excel with great marks while handling the often challenging dialect of working-class Northern England.. These two great accomplishments are due in part to the fine work of Page Clements and Ben Bergin who serve as the dialect coach and rugby consultant, who arm the actors with a firm grasp of the words and fine command of the extensive rugby terminology and drills that are often unknown to most American audiences.

T. Schreiber Studios has been creating a community for developing actors since 1969. It has been voted favorite Off-Off Broadway theatre for the past two years by the Backstage Readers’ Poll and now I know why. The production values rivaled that of many Off-Broadway productions I have seen. While the theatre is extremely intimate, the set design by Hal Tine is quite possibly one of the best sets that I have seen off off Broadway. Anne Wingate’s costumes are also completely spot on and capture the carefree lifestyle of the early 70s without looking overworked in the least.

While everyone might not enjoy the docu-drama style of The Changing Room, it is still a truly rewarding theatrical experience. It attempts to present something that is rarely seen by theatre goers and succeeds by leaps and bounds. The Changing Room is raw, real, and heartfelt. The acting and production values are all first rate. Some of my favorite Schreiber Studios alumni include Edward Norton, Maria Bello, and Peter Sarsgaard. So, who knows? This could be your chance to see the next big star before they make it big, and at $20 the tickets are a great bargain. If you are looking for an intelligent slice of life evening at the theatre, then you should most definitely swing by the Gloria Maddox Theatre and look in on The Changing Room.