Lotto: 2 hours before each show for $40 front row seats

Priscilla Queen of the Desert 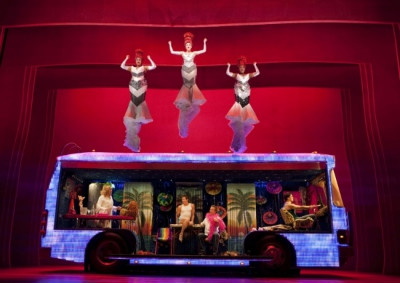 The cast of Priscilla Queen of the Desert. Photo by Joan Marcus.

BOTTOM LINE: A big splashy Broadway musical that is almost too fabulous for its own good, Priscilla is still a great time, as long as you aren’t looking for depth and character development.

Priscilla Queen of the Desert tells the story of three drag queens (well, two drag queens and a transsexual) who travel in a bus from Sydney to Alice Springs (which is sort of like traveling from New York to Las Vegas, but driving entirely through desert). On their fabulous journey across the Australian outback they meet all sorts of unfabulous straight folks and take every opportunity they can get to “dress up in women’s clothes and mouth the words to other people’s songs.” The musical is based on the wonderful 1994 movie The Adventures of Priscilla, Queen of the Desert, but is far more fantastical. There is always a chorus of back up dancers on hand to turn any song into a production number, even when Bernadette, Mitzi, and Felicia are stranded in the middle of nowhere. The musical adds a trio of actual women, often flying over the main action, who sing many of the songs. Like the chorus from nowhere, these women have no role in the story; they exist solely to allow the star performers to lip sync along, since (as we’re reminded several times) in drag performance, the art of the lip sync is foremost.

It feels unfair to compare the musical to the movie, since they are two totally different pieces. After all, part of what makes the film so starkly beautiful is the vastness of the Australian outback, something impossible to communicate within the confines of the Palace theatre (and it is probably for the best that the team doesn’t even try). But this is hardly a re-envisioning of this material. In fact, the plot of the musical hews incredibly close to the film, almost scene for scene (Stephen Elliott, who wrote and directed the film, also co-wrote the book of the musical). I was surprised by how little is changed. Elliott and co-writer Allan Scott have kept almost all of the secondary characters and plot points, much of the same dialogue, and many of the same songs, including “Go West,” “A Fine Romance,” “I Love the Nightlife,” “Shake Your Groove Thing,” and of course, “I Will Survive.”

And many more musical numbers have been added. If a few (“Thank God I’m a Country Boy”) are head-scratchingly odd and out of place, others work to hilarious effect. Since Felicia loves Madonna in the state-side version of this show, you’ll get to hear “Material Girl,” “Like a Prayer,” and a few others. My favorite addition is “MacArthur Park,” a song that is quoted in the film, but never sung. Will Swenson gives a crazily over-the-top performance; along with the outlandish costumes and lighting, it is one of the most memorable numbers in the show, although admittedly much of the scene’s impact comes from the larger-than-life nature of the song itself.

The costumes, designed by Tim Chappel and Lizzy Gardiner, remain one of highlights of this material. Chappel and Gardiner, who won an Oscar for their work on the film, have kept many of their famous designs – the flip-flop frock, the ostrich heads, the wide-legged pants with attached platform shoes, modifying them slightly for the stage. But if you’ve seen the movie, don’t worry – there are plenty of additional costumes as well. And director Simon Phillips keeps the show moving quickly, ensuring that the next eye-popping costume spectacle is never more than a few minutes away. Though I’m not often impressed by high-tech set pieces, I must admit that the title character, a bus named Priscilla, is super cool. With her flashing LED lights, flip-up side panels, and Barbie figurehead, Priscilla is essentially a fabulous gay Transformer.

In fact, everything in this musical is fabulous, and that might ultimately be its biggest problem. It seems strange to ask for subtlety in a story where one character, dressed in silver lame, perches on top of an enormous stiletto, itself on top of a moving bus, and lip syncs to an operatic aria, with yards of fabric billowing behind her. But Priscilla the musical seems afraid to show queer characters actually feeling something, as if this might scare away the mainstream audiences. The cast certainly does what they can. If Nick Adams doesn’t provide a ton of nuance to his performance of Adam (Felicia), it makes sense since the character, always loud and proud, never stops performing. Swenson, who was terrific in Hair, does another fine job here as Tick (Mitzi), the drag queen with a secret (unbeknownst to Bernadette and Felicia, the real reason for the trip is so Tick can visit his kid). Swenson ably portrays Mitzi as conflicted and embarrassed about his life choices, and if his eventual acceptance by his son comes a bit easy, it still makes for a touching scene. But the clear standout is Tony Sheldon; as the transsexual Bernadette, Sheldon provides the heart and truth of the musical. Whereas Swenson and Adams do a decent enough job playing drag queens, Sheldon becomes Bernadette. Sure, Bernadette’s age and life experience naturally allow her more gravitas, but I have a feeling that Sheldon’s remarkable take on this character won’t be overlooked come Tony time.

Yes, drag performance has long used glitz and glam to deal with adversity. But the best drag also has its subversive middle finger raised at straight society, and is cut through with an undercurrent of melancholy. This spirit is palpable in the film, but not surprisingly, it is less evident on stage. Even though there are plenty of crude gay jokes (“Rear Entrance Upon Request” is plastered on the back of Priscilla), the musical still feels somewhat sanitized. Occasionally the word “ass” is replaced by something like “tush,” as if, following the bizarre logic of movie ratings, there is a limit to the number of “bad words” that Broadway audiences will tolerate. No one on stage is ever falling down drunk, much less hung over in the morning. More importantly, the redneck towns, not to mention the riff raff that people them, don’t seem so dangerous. They’re just badly dressed. When the crew gets to Coober Pedy, Adam’s desire to have fun as Felicia, no matter what, puts him into real danger. As in the film, Bernadette comes to his rescue, but just as we’re taking in the reality of the violence, violence all too familiar to queer folks everywhere, the company jumps back into the final chorus of a pop song. In short, there is no menace here. Bad things can happen in musicals, but it is pretty clear from the start that there isn’t much bad that will happen in this musical. When a horrific message is scrawled across the bus at one point, the pure, unadulterated hatred is a shocking awakening..for a moment. But we don’t get the chance to sit quietly and reflect on the implications, since there is another song, and costume change, right around the corner.

If you’re trying to come up with a big, splashy Broadway musical for when the folks come into town, Priscilla Queen of the Desert is an obvious choice. This show is so over the top in its glitz and sparkle that somehow, the term “big splashy Broadway musical” doesn’t seem big or splashy enough. If you’re planning something for girls, or “girls,” night out, then you’ll love the abundance of male flesh here. The person behind me literally gasped upon seeing Nick Adams’s ripped physique in one super-revealing costume. And he has many super-revealing costumes, not to mention super-revealing poses.

And if you, like me, love the original movie, I think you’ll still enjoy the stage version. Actually, seeing the movie might improve your experience, since you will have the film’s highly developed characters in your head as you watch their more simplistic stage versions. Keep in mind, The Adventures of Priscilla, Queen of the Desert is one of my top two favorite movies of all time. I’m not exaggerating. I love it so much that when I was in Sydney, I made the pilgrimage to see the bar where it was filmed (it’s now closed). Far more so than the film, Priscilla Queen of the Desert aims to appeal to a mainstream, albeit gay-friendly, crowd, and perhaps loses something in the process. Some will undoubtedly find the harmlessness of the musical a bit vanilla; if you enjoy watching the real-life Bernadettes, Mitzis, and Felicias, then you might wish for something with more bite. But while you might not bring mom to the midnight drag show at your seedy neighborhood gay bar, you can certainly bring her to Priscilla Queen of the Desert.

(Priscilla Queen of the Desert plays at the Palace Theatre, 1564 Broadway between 46th and 47th streets. Performances are Mondays at 8 PM, Tuesdays at 7 PM, Thursdays and Fridays at 8 PM, Saturdays at 2 PM and 8 PM, and Sundays at 2 PM and 7:30 PM. Tickets are $52 - $127. There is a lottery two hours before each show; winners can purchase two $40 tickets (cash only) in the front row. To purchase tickets, visit Ticketmaster or call 877.250.2929. For more information visit www.priscillaonbroadway.com.)