Tickets are $40 general admission, and $48 for reserved seating.

$20 student rush tickets are available at the box office. 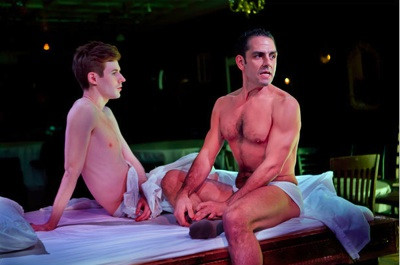 BOTTOM LINE: While perhaps not for everyone, this excellent production of LaChiusa’s very “adult” musical should be high on the list of any musical theatre connoisseur.

The Transport Group, one of my favorite off Broadway theatre companies, has recently started doing shows in non-traditional spaces. Last year saw The Boys in the Band, an excellent revival of a play about gay life in the 1960s, in which the setting (a New York apartment) was recreated in a downtown loft. Last summer they did See Rock City, in which the audience sat in lawn chairs that began the evening as an abstract sculpture. Hello Again receives similar treatment, although since the action spans various decades and locales, the downtown loft setting is more atmospheric than site-specific. If you don’t mind (or in fact enjoy) more complex musical composition that lacks simple, catchy melodies (which describes pretty much all of LaChiusa’s work, including Marie Christine, The Wild Party, and See What I Wanna See), then I highly recommend this production.

Hello Again is suggested by Arthur Schnitzler’s play La Ronde; throughout ten scenes, ten different couples come together (in more ways than one). The overall structure is circular -- The Solider pairs with The Whore in scene one, but goes on to meet The Nurse in scene two, and she in turn goes on to couple with The College Boy in scene 3, until in scene ten, we once again meet The Whore, who is now paired with The Senator. Even though the action shifts through various decades in the twentieth century, the characters themselves do not age; The Young Thing is as young in the 1970s as he is in the 1910s. And many of the characters have lines and melodic phrases that carry over from their first scene to their second, creating a daisy chain of romantic and sexual experiences in which lessons in love, both good and bad, are passed on from one partner to the next.

If you are not familiar with LaChiusa’s work, then it might help to at least sample the recording before going. On first listen, it might feel like there is a lot of “recitative” and not enough “songs.” This isn’t exactly true, but I have found that his work, including Hello Again, requires several listenings in order to fully appreciate the complexity and richness within. This doesn’t mean you won’t enjoy Hello Again if you don’t know the material -– just don’t go in expecting Hello Dolly! or The Sound of Music.

And then there is the explicit nature of the material. If you’re squeamish about sex, this probably isn’t the musical for you. Hello Again is an adult show, in which almost every couple has some sort of sexual encounter which is tastefully, but clearly, staged. This is made even more immediate by director Jack Cummings III’s intimate in the round staging. A bed on a platform stands in the middle of the room, surrounded by ten circular tables which also serve as playing spaces. The audience is seated around these tables, so it is quite likely that at some point during the evening, there will be -- how do I put this -- ”thrusting” (and perhaps a bare ass) mere feet, or even inches, from your seat. The sex isn’t prurient or at all gratuitous; indeed, it is essential to the repetitive, cyclical nature of the show. In fact, I found that it eventually became a bit monotonous, and I suspect that this is perhaps the point. Sex in Hello Again isn't the goal, but merely a necessary step on the path towards forging true human connections.

This piece may strike some as more cerebral than emotional; because we only see each character for two scenes, it is difficult to invest in any one. Some characters stand out more than others, although I suspect this is more because of the material than the performers, who are all excellent. Days later, I am still thinking about scene 7, between The Young Thing (Blake Daniel) and The Writer (Jonathan Hammond). And when The Young Wife (Alexandra Silber) steps out from underneath her husband in scene 5, her soaring song is one of the highlights of the evening. And then there is the haunting title theme, sung by The Whore (Nikka Graff Lanzarone), which frames the show. But I suspect Hello Again is a piece in which ten different people might have ten different favorite moments, perhaps stemming from one’s own distinct experiences in love (and lust).

Overall, this is an excellent production. Sandra Goldmark’s set is minimal, tasteful, and appropriate to a piece in which the action moves from a river dock to a movie theatre to a large ship. R. Lee Kennedy’s lighting design, in which various bulbs and fixtures hang down from the ceiling, helps create an atmosphere that is at times romantic, dreary, or haunting, depending on the scene. But I have to say my favorite lighting moment comes at the top of the show, with The Whore’s entrance. Indeed, Cummings uses the large loft space extremely well; no matter where you sit, you will have an excellent view; some things will be close, and others will be further away. And that's an appropriate metaphor for human interaction, I guess. Although Hello Again isn’t for everyone, The Transport Group’s production is certainly worth a visit for those interested in more adult musical theatre.

(Hello Again plays at 52 Mercer Street, just south of Broome, on the 4th floor, through April 10, 2011. Performances are Tuesdays through Fridays at 8PM, and Saturdays and Sundays at 3PM and 8PM.  On Saturday, March 26th, there are two performances at 7PM and 10:30PM. Tickets are $40 for general admission and $48 for reserved seats. $20 student rush seats are available at the box office, starting one hour before the show. For more information, and to purchase tickets, visit transportgroup.org.)