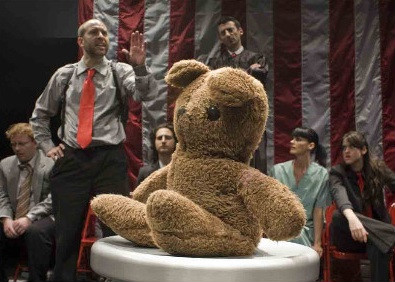 BOTTOM LINE: A clever satire on paranoid post-9/11 American culture. Timely, intelligent, and straight-up hilarious, this show is a must-see for anyone who enjoys a good parody of daytime news coverage or court TV.

The central character in Clifford Chase’s Winkie is Winkie the teddy bear: not an actor playing a teddy bear, an actual glass-eyed, brown fur, huggable stuffed animal. After providing comfort to three generations of the Chase family, most recently the youngest son Clifford, Winkie has now willed himself into life. Unfortunately, Winkie is soon accused of heinous acts of terror, and of spearheading a massive terrorist organization on American soil. He is captured, tortured, and taken to trial. The trial is the main setting of the play, and drama unfolds as witnesses take the stand to take down Winkie.

The 9,678 charges brought against Winkie are awesomely absurd. They range from acts of terror and treason to three types of sodomy, corrupting the youth of Athens, and teaching evolution to schoolchildren. The embodiment of all the things “real patriotic Americans” fear, of course. The trial is brought to you via Dan Abrams in an MSNBC Investigative Report, complete with pretentious pauses, overly dramatic teasers, and circular reasoning. The witnesses that suggest Winkie’s innocence are villainized and dismissed, and those who use the right buzzwords (such as Homeland Security, Islamic Extremism, Potential New Threats, Osama Bin Laden, and Proud To Be An American) are applauded.

Other than an oversized American flag and a few chairs, Clifford Chase’s Winkie has a practically bare set, so this show is all about the acting. As the prosecutor, Sean Phillips has the perfect judgmental demeanor, and his booming trial lawyer assurance is made stronger and more comical by the way he never looks anywhere but down his nose at his peers. Nick Paglino exerts huge amounts of energy playing both Clifford Chase and the voice of Winkie. In fact, the whole ensemble is fairly strong. Erin Wheelock, who plays several characters, gives a memorable and dead-on portrayal of the midwestern congresswomen defending her heterosexual and Christian constituents. Any monotony in the trial scene broken up by dramatic and high-energy fight choreography by Michael A. Blackmon.

Clifford Chase's Winkie is extremely well-written, with the appropriate political pundits guffawing over Winkie, and dialogue that appropriately switches from realistic to cartoonish. The talented Matt Pelfrey adapted the story from (the real life) Clifford Chase's bitingly funny and smart novel Winkie, and the resulting play is in good hands with Drama Desk Award winning Godlight Theater Company.

There is a problem in this country with media frenzy. Turn on any daytime media network and you are bombarded with new terrorist threats, health epidemics, religious extremism, and murderers that target girl scounts and the elderly. It’s a wonder that we don’t have more bomb shelters and state militias. The fact that we don’t suggests that the average person is likely fed up with the frenzy, and this aggravation is the main theme of Clifford Chase's Winkie. This show isn’t downplaying the seriousness of terrorism; it’s commenting on the ridiculous and dehumanizing ways Americans respond to our fear of terrorism. As a culture, we need instant explanations for an event. We’re so eager to find someone responsible and place blame somewhere -- anywhere -- that we acceptably resort to torture, ignore plain facts, and scapegoat any likely suspect. It’s comical if you can take a step back and observe the absurdity that is our popular culture, but scary when you realize this is our popular culture. Clifford Chase’s Winkie is a parody of all this, and thankfully focuses on comedy. Only at a few critical point does it make the audience grapple with the thought “Oh wait, this is kind of about me.”