For discount offers, go to  www.broadwayoffers.com or call Telecharge Special Offers at 212.947.8844

Discount tickets are available for $36.25 with discount code BBOX.

Student tickets are available for $20 with valid ID and discount code STUD. 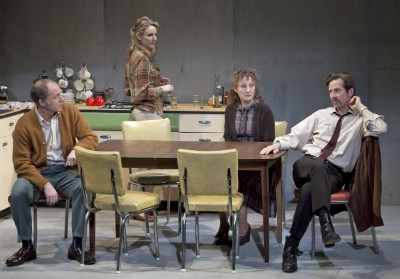 BOTTOM LINE:  A clean, sharp production of a powerful play, somewhat lacking in passion, but with solid performances across the board.

Since Biblical times, architectural themes have provided talented writers with ample material from which to fashion memorable works of fiction. The Old Testament tale of the Tower of Babel. The Master Builder by Henrik Ibsen. Ayn Rand’s The Fountainhead. And Michael Frayn’s Benefactors, now in revival by Keen Company at The Clurman Theatre on Theatre Row, the latest offering in the company’s season-long tribute to Frayn’s works.

The play revolves around David (Daniel Jenkins), a well-meaning architect seeking to build new homes to replace the “twilight area” housing of Basuto Road; his wife Jane (Vivienne Benesch), an anthropologist; and their neighbors Colin (Stephen Barker Turner), a journalist, and his wife Sheila (Deanne Lorette), a one-time nurse. Set in England between 1968 and 1984, the play is infused with a sense of the political correctness of the time: the liberal establishment knows what is best for the lower socio-economic classes, notwithstanding what the lower classes might think is best for themselves.

The four characters have at least two things in common: (1) the need to seek gratification through the abstract contemplation or management of other people’s lives, rather than by living their own; and (2) their basic contrariness. Thus David exhibits more concern for the residents of Basuto Road and for Colin and Sheila than for his own family. Jane sees the world as an anthropological project, devoting herself to the market research aspects of David’s architectural scheme. Colin reports on the lives of others but fails to come to grips with his own life. And Sheila devotes more time to assisting Jane in her household chores than in fulfilling her own familial obligations.

Additionally, all four define themselves only in opposition to others. If David favors something, Jane and Colin instinctively oppose it. But when Colin opposes it, Jane opposes Colin - which aligns her back again with David after all.

Over time, all four change – but in different directions - and it is that evolutionary development that provides the play with its intellectual and emotional depth. David, who truly cares about the residents of Basuto Road, nonetheless eventually comes to conclude that, regarding his architectural scheme, “in the end, it’s not art, it’s mathematics.” Ultimately, the term “progressive collapse,” initially intended to describe an architectural problem of the sort that culminated in the tragedy at the World Trade Center, comes to describe his life. Meanwhile Jane, the erstwhile analytical outsider, becomes emotionally involved in the lives of the people on Basuto Road and her allegiance may (or may not) shift from David to Colin.

Colin, the ultimate outsider, stops reporting the news and begins to make it, first as a squatter attempting to block David’s project, and then as an unsuccessful candidate for Parliament. And Sheila evolves from being a timid, needy housewife, barely able to cope with the limited responsibilities of picking her children up from school, to becoming David’s secretary and confidante. Sheila eventually frees herself completely from Colin’s dominance, and embarks on a course of therapy destined (we hope) to make her whole again.

All four actors turn in good performances and the director, Carl Forsman, has done a creditable job. Overall, this is a clean, sharply delineated production, and it provides a satisfying evening’s entertainment. But I was mildly disappointed. The first act drags a bit; it is not really until the second act, an hour into the production, that I truly felt engaged. I have seen other productions of this work that I have enjoyed more; most recently, I saw Retro Production’s Off Off Broadway revival at the Spoon Theatre, a production that I found to be earthier, more gut-wrenching and passionate. But that ought not dissuade you from seeing this one, which is still a worthwhile production in its own right.