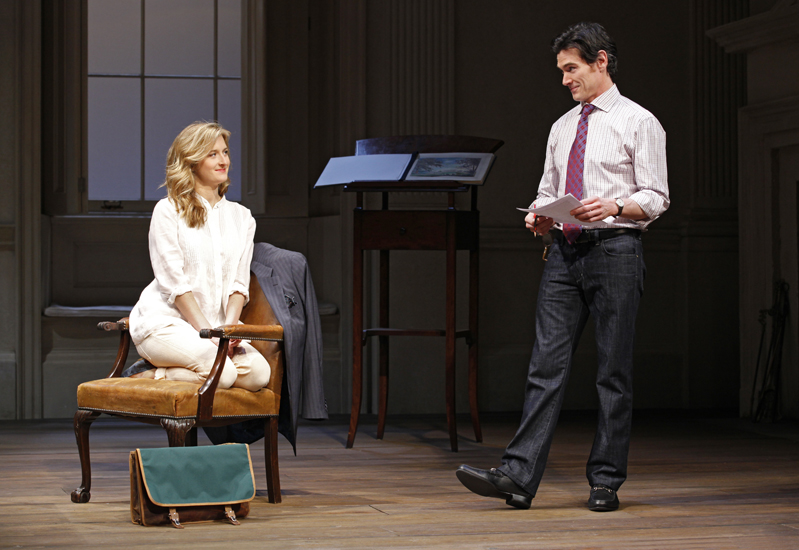 BOTTOM LINE: A very good but less than perfect production of a brilliant and intellectually challenging play, with some outstanding performances.

Tom Stoppard is arguably one of the world's greatest living playwrights and Arcadia, one of his best plays, is widely recognized for its contribution to contemporary theatre. Originally produced at the Royal National Theatre in London in 1993 and directed by Trevor Nunn, it won the 1993 Olivier and Evening Standard Awards for Best Play that year. When the first New York production opened two years later with an entirely different cast, it won the New York Drama Critics’ Circle Award and was nominated for the 1995 Tony Award. And two years ago, when the play was revived in London under the direction of David Leveaux, it received even more glowing reviews than it had 16 years earlier, thus setting the stage for its eagerly anticipated current return to Broadway with a new cast under Leveaux's direction.

The theatre-going public’s understandably high expectations for this New York revival are largely, but not completely, realized. To be sure, this remains an extraordinary work. Stoppard is a theatrical wizard and polymath whose plays involve the biggest, deepest and most complex philosophical and scientific ideas, ranging from chaos theory to determinism to free will, from Fermat’s Last Theorem to fractals to computer algorithms, from Newton’s Second Law of Thermodynamics and entropy to the irreversibility of time, from Byron and poetry to landscape design and botany -- ultimately arriving at man’s most fundamental ontological and epistemological questions regarding the very nature of life, death and reality itself. And if all that sounds daunting, never fear: Stoppard is such a literary genius that you’ll probably find him bringing more clarity to those subjects than any course you've ever taken on a related subject. And there’s little doubt in my mind that you’ll find Stoppard’s presentations far more entertaining to boot. And this is, for the most part, a fine production. The play’s direction is superb, the sets and costumes are first-rate, and several of the performances are truly outstanding. Both Tom Riley as Septimus Hodge and Billy Crudup as Bernard Nightingale, in particular, deserve to be singled out for their remarkable performances.

But good as the production is, it is not perfect. For one thing, the first act gets underway too slowly and really should be shortened and tightened up. In a recent interview, Stoppard himself admitted that he would like to take three minutes out of the first act but was having difficulty figuring out how to do it; here’s hoping he solves his problem, perhaps even excising a few minutes more than that. My second and only other real misgiving about this production relates to the casting of Bel Powley as Thomasina Coverly. She is making her Broadway debut in Arcadia, having won critical acclaim for her role as Maggie in Tusk Tusk at the Royal Court in London, but for this production she does not really capture her character’s aristocratic nature. She is only one of a dozen actors in the play but, unfortunately, the plot really revolves around her, so this distraction has a disproportionately negative impact upon the production as a whole.

The play is set in Sidley Park, a stately English home in both the years 1809–1812 and in the present (1993 in the original production and, presumably, in 2011 in this latest revival).  In 1809, Thomasina Coverly (Bel Powley), a teenage prodigy, apprehends a number of remarkable mathematical and physical truths on her own, including the laws of thermodynamics, chaos theory and fractals, while her tutor Septimus Hodge, (Tom Riley, interestingly played by Crudup in the original Broadway premiere), is engaged in an illicit romantic liaison with Charity Chater, the wife of Ezra Chater (David Turner), a second-rate poet who, upon discovering his wife’s dalliances, challenges Septimus to a duel. (Hodge is also a friend of Lord Byron who, as it turns out, also is staying at the house at the time and who also gets to sleep with Charity.) Neither Charity nor Byron ever actually appear in the play, but the importance of their roles cannot be overestimated.

In the present, Hannah Jarvis (Lia Williams), a writer, is investigating the history of a hermit who may once have lived on the grounds, while Bernard Nightingale (Billy Crudup), a literature professor, is investigating the very period in the life of Byron when he was in Sidley Park.  As matters unfold, the truths about what actually occurred in Sidley Park two centuries earlier is gradually disclosed.

(Arcadia plays at the Ethel Barrymore Theatre, 243 West 47th Street, between Broadway and Eighth Avenue, through June 19, 2011.  Performances are Mondays through Saturdays at 8PM, with matinees Wednesday and Saturday at 2PM, through 3.20.11.  Beginning the week of March 21, performances are Tuesdays at 7PM, Wednesdays at 2PM and 8PM, Thursdays at 7PM, Fridays at 8PM, Saturdays at 2PM and 8PM and Sundays at 3PM. Tickets are $71.50-121.50 and are available at telecharge.com or by calling 212.239.6200.  For more info visit www.arcadiabroadway.com.)