The Shape of a Girl

Off Off Broadway, Solo Show
Runs through 10.28.18
FringeHUB, 685 Washington Street 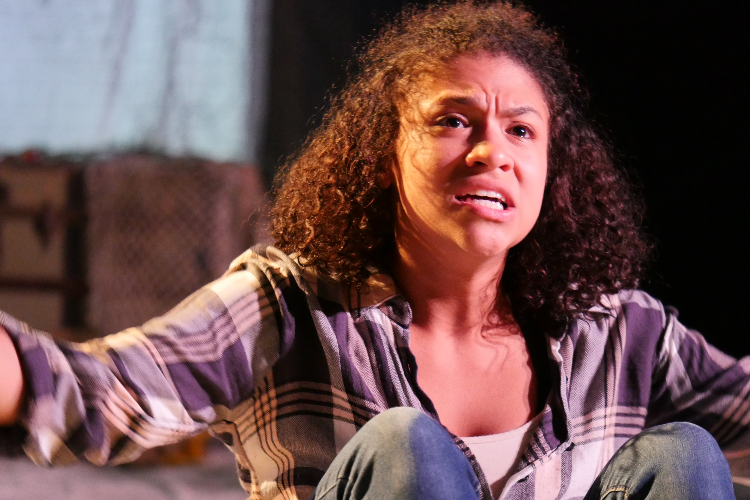 Kendra Garnett in The Shape of a Girl. Photo by Terysa Malootian.

BOTTOM LINE: This story is important to share, no matter how many times it has been told.

The Shape of A Girl was written over a decade ago, yet the story is sadly all too familiar in 2018. It follows Braidie (the expressive Kendra Garnett) who is in the throes of adolescence, struggling through her relationships with her brother, her mother, and most importantly, her childhood friends. We learn she is part of a tight-knit group of friends, whose queen bee has targeted a single girl who the friends bully, with increasing violence and aggression. Braidie struggles with guilt for her complicity in the bullying and makes attempts to remove herself from this pattern.

The story takes place over a two-week period, but Braidie revisits moments in her childhood as she wrestles with the person she has become. Ed Wierzbicki’s staging, with the help of the show’s projection designs, makes clear when these shifts happen. Because of this, the small stage does not hinder the story’s expansive and ever-changing setting. Kendra Garnett's transformational qualities are impressive; she plays every character in the show convincingly. The live music is evocative, as is the lone bell used to transport us to this small island town, where one might feel isolated and melancholy.

Bullying continues to be a major issue for children, especially in the age of Instagram and Snapchat. It's especially insidious as kids, influenced by adult social media culture, now have the luxury of anonymity online. None of this is especially new, so at times, the show feels dated because of this. But The Shape of a Girl serves as a fantastic window into the soul of one girl who is trying to figure out how to be a stronger, braver person.

The Shape of a Girl is written by Joan MacLeod. Performed by Kendra Garnett. Directed by Ed Wierzbicki. Original music by Carla Stoddard.