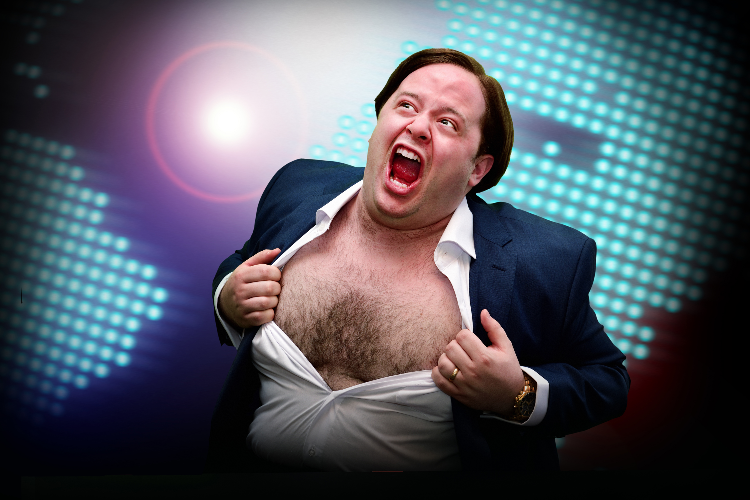 BOTTOM LINE: The Information War is a satirical reinterpretation and behind-the-scenes look at Alex Jones over the span of his career.

The set is simple and clear: a newscaster desk with a microphone and a large television monitor, both displaying the iconic logo of InfoWars. Alex Jones (Chris D’Amato) enters the stage, pulls stacks of paper out of his backpack, and prepares for his show.

The Information War consists of a series of actual Alex Jones segments, performed by D’Amato, that take place over the span of several years. It is in the spaces between the segments, however, that a story begins to unfold. We see the difference between Jones’ on-camera persona and his actual nature. He can “turn off” the rage and the mania at the drop of a hat.

But as the play progresses, the line that separates Alex Jones the character from Alex Jones the person begins to blur. Through telephone conversations with his wife, off-screen interactions, and interludes of chaotic and nonsensical sound bytes, we witness Jones’ descent into insanity.

Though the concept is intriguing, and D’Amato’s performance is engaging, do we really need to humanize Alex Jones? Does this play fall into the trap of excusing the hateful conduct of white men by blaming their behavior on mental illness rather than pure racism, misogyny, and xenophobia? While we can laugh at D’Amato’s portrayal, the truth is that nothing is funny about what Jones is accomplishing with his hateful shtick.

D’Amato’s impressions are certainly over the top and funny, and the use of off-stage voices to create a variety of phone-call characters is creative. But I question the message of this play—it doesn't have the complexity to pull off what I imagine it is trying to do. By portraying Jones as someone who gradually goes from intelligent to crazy, rather than as someone who is consistently, unforgivably terrible, The Information War ventures into dangerous territory.