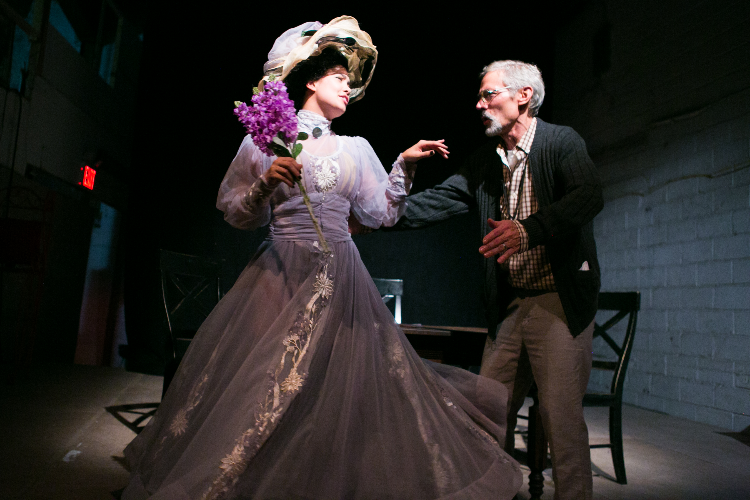 Aurora Leonard and Jeff Paul in The Gibson Girl. Photo by Jasna Bouchard.

BOTTOM LINE: Solid, if somewhat predictable, new play about a middle-aged man in crisis, a grieving family on the verge of collapse, and the bewitching young woman who just might save them all.

Mike Amato’s engaging, if somewhat trite, new play The Gibson Girl adds a twist to the genre of the grieving family drama. David (playwright Mike Amato), a middle-aged adjunct English professor whose writing career was cut short when he was caught cheating in grad school years ago, returns home after the death of his mother. Drowning in grief and long-term shame, his life seems to be at a dead end—until he meets his nephew’s 26-year-old roommate Kristin (Aurora Leonard), aka "Rocket Child," an endearing, brightly-dressed veteran of Burning Man and a professional fire-spinner—a performance artist who twirls something that looks like a fiery, double-ended coat rack.

Kristin gives everybody hugs ("from the right," she explains, "so hearts touch"), distributes hand-written fortunes, and gets David’s bickering father and sisters to laugh again. Her wacky warm-heartedness recalls the manic pixie dreamgirl trope beloved of indie films—that eccentric, beautiful, and free-spirited girl who gets the brooding hero to embrace adventure. David finds himself falling in love and compares Kristin to  another ideal woman, The Gibson Girl—created by cartoonist Charles Dana Gibson in the 1890s and the subject of David's long-gestating book. Kristin, who was a lawyer before she took up fire-spinning, resists being stereotyped and warns that "I’m not some goddamn perfect little fairy woman." The play tries to resist romantic cliché, and yet it can’t quite overcome the predictability of a weary middle-aged man revived by the presence of a pretty, lively young woman with a heart of gold.

Despite its flirtation with cliché, Amato’s play is well written, with taut dialogue, detailed characters, and a meticulously created world. The momentum fizzles toward the conclusion, when various complex, if not fully developed, inter-familial arguments about David’s ailing father Frank (Jeremy Russial) threaten to derail the main David/Kristin plot. A subplot about the conflict between Frank, who appears to have dementia, and David’s handyman nephew Eugene (Jeremy Russial) does not help move the play forward. Similarly, as the play nears its conclusion, the sibling rivalry between sisters Sukie (Jeannie Dalton) and Zoe (Melissa Roth) reignites as they argue over who will care for Frank. It’s as if the play can’t decide if it’s about a man in mid-life crisis, a grieving family, or siblings struggling to deal with a sick father.

Director Debra Whitfield helms an well-paced production that flows seamlessly from one scene to the next. The ensemble is uniformly strong. Standouts include Jeff Paul in the dual roles of Frank and Gary, Sukie’s smarmy husband, and Aurora Leonard in the dual roles of Kristin and Katherine, David’s mother, seen in memories and dreams. Antonietta Christina (Stia) Giannini’s costumes work miracles on a shoestring budget, particularly Kristin’s steampunk-meets-circus-meets Gibson Girl wardrobe. In all this is a quality production of a well-written, if somewhat unfocused, new play.