Adapted by Kelly Strandemo and the Ducdame Ensemble, based on text by Aristophanes;
Directed by Shira Milikowsky
Part of the 2018 New York International Fringe Festival

Off Off Broadway, Play Adaptation
Runs through 10.28.18
FringeHUB, 685 Washington Street 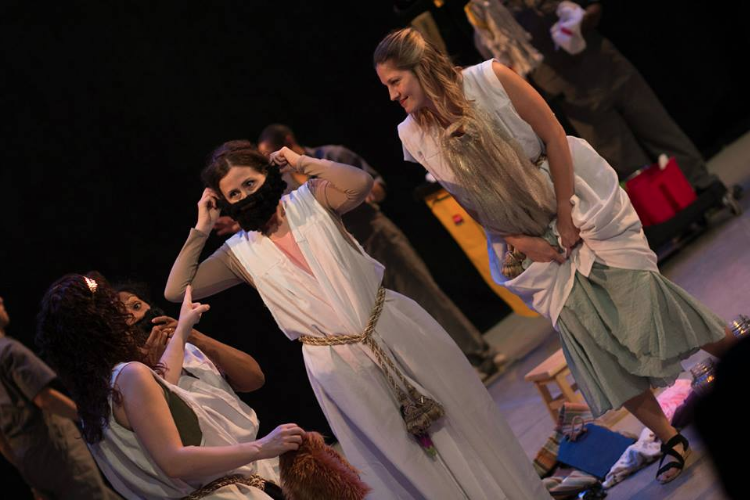 The Ducdame Ensemble in The Congresswomen. Photo by Samantha Blinn.

BOTTOM LINE: Women take control of the government in this hilarious update of Aristophanes.

Ducdame Ensemble has brought a very timely ancient Greek comedy to FringeNYC. Aristophanes' The Congresswomen (also known as Assemblywomen or Ecclesiazusae) is adapted by Kelley Strandemo and the ensemble just in time for the 2018 midterm election. Shira Milikowsky directs this cross-dressing ensemble of twelve in their great effort to attain understanding and equality, or at least peace.

It is early morning in the streets of Athens. Praxagora (Kelly Strandemo) holds aloft her lantern and prays to her favorite goddesses that a group of brave women will succeed in taking over the government. Her friends Atalante (Indika Senanayake), Despoina (Brittany Chandler), and Glykeria (Jane May) finally appear, complaining about all the work they must do to satisfy their husbands. In tunics and beards that make them look a little like their office-holding men, these women will infiltrate the assembly and pass new legislation that will turn the government of their city-state over to them. Most of the classic play is sympathetic to women, and it shines with some modern updates. The women, in their beards, must now be careful to swear only by Zeus and Apollo, not by Artemis. What would happen if other men saw these disguised ladies multi-tasking? After all, everyone knows men can only do one thing at once.

In a hopeful nod to the upcoming election, the women end up controlling Congress. Their men are slightly concerned at the massive social upheaval that is to come, until they are assured that they will not be forced to do any cooking. (Massive communal dining halls and other public labor projects will still be handled by Athenian slaves, showing the limit of Artistophanes' progressive tendencies.) Otherwise, the men will be free to stay home and handle domestic affairs. How hard can that be?

Indeed, this production shows the brilliant nightmare that greets a new stay-at-home dad. While Praxagoras is busy with government transitions, her husband Blepyrus (Thomas DeMarcus) is driven to distraction by their children's needs. Only now can the pair finally appreciate what each other does. Male-centered double standards of beauty get a makeover as well. The new laws note that, if everyone is truly equal, then older women in search of male lovers will be able to go to public cruising areas and be first in line. This fair-sounding rule is tested when young Chremes (Sam Gilroy) arrives to meet his young, beautiful, and conceited Euterpe (Indika Senanayake). The lively octogenarian Donaldyia (Rayshaun Sandlin) invokes her right to steal the lad, but is soon contested by the even older Harvellah (Brittany Chandler). Here, "Time's Up" benefits those who have waited a long time for their rights.

Ducdame is a female-driven powerhouse. Last year, they staged the North American premiere of The Enchantment by Victoria Benedictsson, whose effect on Henrik Ibsen can only now be evaluated. Shira Milikowsky's direction brings this fairly forward-thinking Aristophanes text to life. The ensemble helps fill in the bare performance space at Martha Graham Studios. Those performers not featured in the scene appear in the background wearing grey overalls, helping to create human walls and other scenery. Choreography by Andrew Barret Cox and musical direction by Ericka Ross remind us that democracy can be a celebration.

The Congresswomen is adapted by the Ducdame Ensemble, based on text by Aristophanes. Directed by Shira Milikowsky. Choreography by Andrew Barret Cox.