Off Off Broadway, Improv/Performance Art
Runs through 10.27.18
FringeHUB, 685 Washington Street 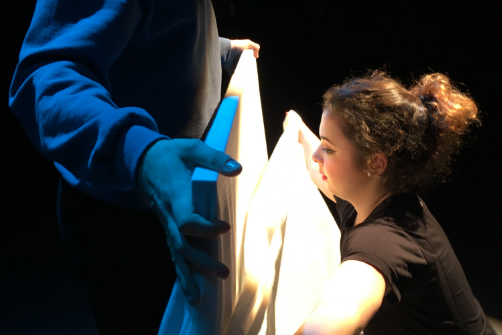 Cucumber Dogs, in association with Sitting Shotgun, invite the Fringe audience to witness a miraculous birth of a theater piece and even contribute to its creation in their interactive TBD: The Live Devising Project. Known as "devised theater," the format engages the audience members in sharing their experiences on a particular topic. Those stories later become an inspiration for the brand-new piece created on the spot by the cast. Every show is different and nobody knows what’s to come.

The ensemble creates three mini-shows in the span of one performance. The process consists of three phases: gathering source material from the audience, ideating with the team, and creating a story. Each part is timed, making TBD a very dynamic experience and adding an additional layer of suspense: will the company stand up to the challenge?

First, a volunteer chooses a random topic (like Magic, A Day at the Beach, or Travel) from a pre-made topic board. The audience gets five minutes to share thoughts, while ensemble members take notes and ask follow-up questions. Over the next five minutes the ensemble brainstorms, and the audience gets to offer a suggestion or throw in a prompt drawn out of the box (like "constant contact" or "dance break"). They then take ten minutes to develop scenography—various props appear, music is picked, and designer Joe Scardino adds some amazing improvised lighting for a high production value, which is difficult to achieve in a festival setting.

Before you know it, the show is unfolding in front of you, somewhat improvised but following the previously discussed dramatic arc. The sketches are mostly physical, set to music and voice over. Cucumber Dogs use a three-part structure to build the story, elevating the trivial experiences of audience members to existential metaphors. Sometimes the results seem precocious and don’t quite work but hey, you try to develop and put on a show in 15 minutes. Of course having audience members entrust their personal experiences means there's already a level of investment in the story already. And as the devisers say, it's all about going through this together.

Devised Theater, much like improv, relies heavily on connection between the participants. It is inspiring to see the international ensemble of Cucumber Dogs collaborating seamlessly. There is much to learn from them about efficient communication, respect, and putting the mutual goal above individual ambitions. For that alone, TBD: The Live Devising Project is worth attending for anybody who interacts with other people (which means everybody).