Off Off Broadway, Musical
Runs through 10.21.18
FringeHUB, 685 Washington Street 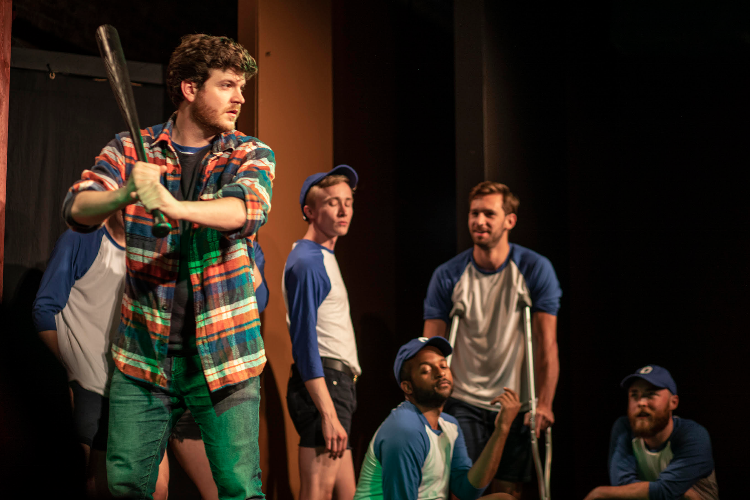 Ryan Cashman (at bat) and the Chicago cast of Striking Out. Photo by Jon Wes.

BOTTOM LINE: In a world where all ballplayers are gay, what happens when one isn’t?

In the world of Striking Out, all baseball players are gay. That’s just the way it is—there has never been a straight baseball player. This is all fine for the Chicago Otters—they have the dashing Lance Valentine (Jordan Wilson), all-star hitter (and presumably a pitcher and/or catcher, although as we’ll see, Striking Out doesn’t care about such things). That is, until Lance gets injured in the opening number. The race to find a replacement before the season begins seems doomed—until a radio announcement catches the ear of corn-fed Iowan Jimmy Roberts (Ryan Cashman), who always thought he’d be stuck wasting his talent on hitting rocks at cattle. Jimmy decides to move to Chicago to tryout for the team—accompanied by his girlfriend Penny Price (Hannah Ingle). But wait? Aren’t all ballplayers gay? It seems that Jimmy will have to go in the closet, and have Penny pretend to be his…sister! Yeah, sister. That should work.

This sets the stage for the rest of the show. Will Jimmy be found out by the team? Will Lance get replaced by Jimmy? Will Penny become unhappy being a straight man’s beard? Will Exposition (that’s the TV station) reporters Susan Winters (Lauren Summers) and Roberta Nightingale (Tina Arfaee) get their big scoop? Will slimy agent Chester Wiesel (Alex Young) successfully blackmail Jimmy into signing with him? Will Jimmy suffer a sudden bout of self-loathing and shame, move back to Iowa, get inspired by the drag queen ghost of Babe Ruth (Rence), and then move back to Chicago just in time to rejoin the team in the bottom of the 9th inning of the final game of the World Series? And will anyone ever get to visit Mark Cuban’s yacht?

If it isn’t clear by now, Striking Out is quintessential Fringe—silly and random, but also more than a bit rough around the edges. While a low-key sensibility is appropriate for this material, the cast seems strangely under-rehearsed (with ensemble members forgetting lyrics and dance steps), the staging is uninspired, and at times the book becomes somewhat self-indulgent and bloated. Indeed, Striking Out would benefit from having a director who didn’t also write this material.

Striking Out is also weirdly asexual. Aside from the team’s purported enjoyment whenever they head to the “Showers! Showers!,” these ballplayers don’t show much inclination for…playing ball. Even a scene with everyone is in towels feels chaste. Perhaps the intention here is to stage that kind of gayness you could bring home to mom? But in neutering these Otters, Striking Out eliminates what could be a key element of dramatic tension and conflict—Jimmy claims to be gay, but is never forced to confront what this actually means. It’s a huge missed opportunity in the book—aside from Jimmy’s “guilt” about lying, there isn’t much at stake.

There are definitely some solid aspects. Ryan Ford’s music is staunchly what I think of as “contemporary musical theatre,” especially the final number; even better are Levin and Ford’s lyrics, which show a nuanced sense of rhyme and meter, with a few musical theatre references thrown in to boot. And for such a testosterone-heavy show, it’s actually the women who stand out the most, including Ingle as a just-holding-on, at times even gleefully deranged, Penny, and Young as the maniacal Chester Wiesel, with long hair humorously hanging out from beneath her bald cap.

And then there’s Rence, who plays the ghost of Babe Ruth (with the voice of Harvey Fierstein and white platform sneakers), randomly appearing midway through the second act to completely overshadow the rest of the show—and with a lip sync. While singing live might allow for greater comprehension of what seem to be very clever lyrics, this sudden injection of energy still outshines everything else in the show. If only it weren’t such a shameless (if perhaps unaware) example of the problematic “Big Black Lady” trope. Sure, perhaps it’s asking a lot for a silly Fringe show to have more informed racial politics. But for a script that explicitly claims to celebrate inclusion of people of color, relegating the few non-white actors to playing stereotypes (there’s also the Asian guy looking for his dragon fan) strikes me as a disappointing way to envision a gay utopia.

Striking Out is written (Book and Lyrics) and directed by Adam Levin and Ryan Ford, with Music by Ryan Ford. Choreographed by Kyle Ryan and Lily Staski.