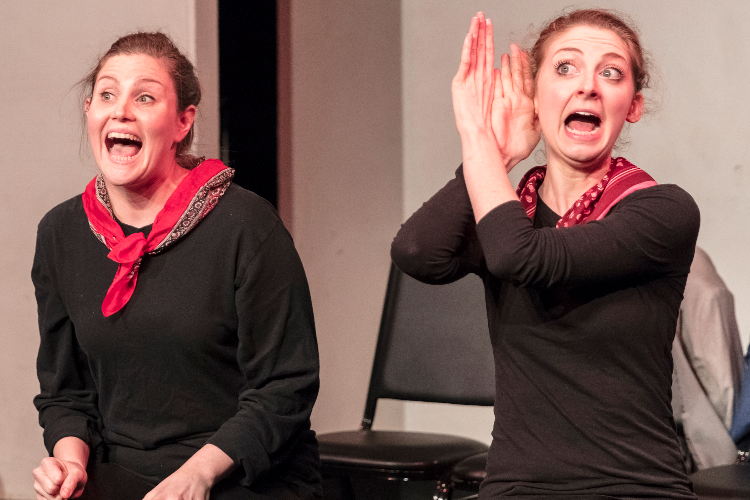 As anyone in theatre will tell you, a play depends on your vantage point: whether you’re performing, running things backstage, or watching from the audience, the same show can be a totally different experience. It is from this concept that comedic duo Devin O'Neill and Kristina Grosspietsch create Opening Night, using eight different characters to tell the tale of a Broadway premiere gone awry.

Set in Broadway’s so-called "golden age," Opening Night begins as twin sisters—and bitter rivals—Joan de Tuileries (Grosspietsch) and Margo Nightingale (O’Neill) each prepare for their one-woman career retrospectives, only to discover they’ve been scheduled to perform together. As the women squabble for the spotlight, we’re transported to the tech booth, where eccentric director George (O’Neill) revels in the spectacle he’s built and stage manager Nancy (Grosspietsch) scrambles to control the chaos. Next, Grosspietsch and O’Neill take us backstage, where two stagehands wrestle unwieldy props and unaddressed romantic tension as they find themselves alone in the dark together. Finally, feuding brothers-in-law Gary and Bill react from the audience, their zeal for the show breeding unexpected common ground and hope for reconciliation.

With each set of characters, Grosspietsch and O’Neill display remarkable versatility and comic precision. As divas Joan and Margo, the two sync up perfectly in their mirrored physicality and stinging repartee. Likewise, their portrayal of Gary and Bill’s journey from stubborn animosity to genuine bromance is as heartwarming as it is funny. George’s delusions of grandeur and fear of obsolescence speak to creatives’ constant inner war, while stage managers—or anyone running a messy situation—will relate to Nancy’s frantic tenacity, de facto nanny role, and top-of-the-world triumph when things go right. While less developed, the stagehands’ charming awkwardness and simmering attraction keep us engaged in off- and onstage drama. Occasionally, the overlapping dialogue can muddy our focus, especially in the piece’s Joan/Margo scenes and hectic finale. Nonetheless, this tactic amplifies moments of chaos, and the women manage it by playing to their respective sides of the audience when splitting our attention.

Absurd and oddly touching, Opening Night reveals the interconnection and insanity behind any complex human endeavor. To paraphrase Geoffrey Rush in Shakespeare in Love, the natural state of theatre, and life, is one of insurmountable obstacles and imminent disaster. Yet miraculously, it all works out.

Opening Night is written and performed by Kristina Grosspietsch and Devin O'Neill. Directed by Matt Alspaugh.