Off Off Broadway, Short Plays
Runs through 10.24.18
FringeHUB, 685 Washington Street 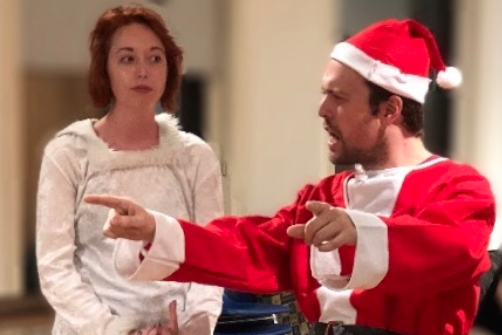 BOTTOM LINE: A look into the crisscrossing lives of shoppers at a Midwestern mall on Christmas Eve.

From the team that brought us one of 2016 Fringe’s most celebrated plays—The Gorges Motel—comes a new piece: One Christmas Eve. The play welcomes the audience into intertwined stories of shoppers at a Michigan mall on Christmas Eve. The piece is structured as a series of nine short plays, performed with sleek and smooth transitions, imagined by director Chris Goutman. Each piece stands well on its own and varies in genre and subject matter, though the playwrights take advantage of the high stakes of the holidays. Christmastime can be, as the various playwrights explore, the “most wonderful time of the year,” but also the most stressful, painful, nostalgic, fraught, and silly.

Throughout the program, the artists of One Christmas Eve drop us into slivers of lives of various characters throughout the mall. There are the characters who are just home for the holidays: the daughter home from college for the first time since her parents’ divorce, and the high school couple reunited for one last “what if.” Others are deep in the business of Christmas: the disgruntled mall actor, stuck in the role of Marley in A Christmas Carol; the underpaid and overworked athletic store saleswoman who is frustrated she didn’t get the promotion she deserved; the overeager mall cop, too quick to call 9-11; and the Santa-and-elf duo, who are just in it for the cheer. And then there are characters who grapple with the pressures of tradition: the struggling mother forced to shoplift for her daughter’s gift, and the widower and his new wife, reckoning with old family traditions.

Weaving these stories together is the spirited cast of One Christmas Eve. Standout actors include the versatile and commanding Darcie Siciliano, and the beguiling and spry James Taylor Odom. The plays that veer most out of traditional story lines and take full advantage of the talented cast are James Hindman’s Good Will Toward Men and Craig Pospisil’s Bearing Gifts We Traverse Afar.

One Christmas Eve is a charming and mostly predictable evening of plays. It’s wrapped up with a pretty song like a ribbon wraps a gift. The song, directed at the audience, wishes us all a Merry Christmas. It’s nice, but a little strange in mid-October.