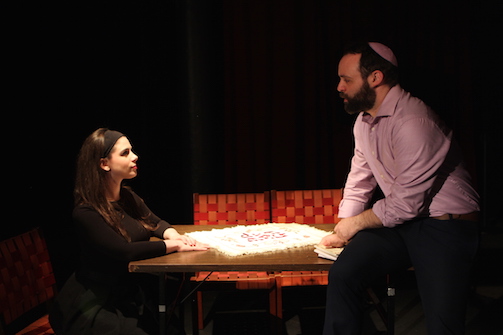 BOTTOM LINE: Gabrielle’s modern-but-broken life is turned on its head as she reconnects with her religious roots on a study abroad trip to Jerusalem.

Gabrielle’s parents bicker at her through the wall while she and her cliché American boyfriend make out with the uncomfortable fervor of teenagers; the only thing creating space between the two college undergrads is a Whitman’s chocolate sampler filled with homemade pot cookies. Observance begins in this bleak suburban setting in the final moments before Gabby (playwright Elyssa Nicole Trust) boards her flight to Jerusalem for a semester abroad at her grandmother’s behest. The context of her life is laid bare as her mother (Sue Berch) stuffs condoms into the suitcase and Gabby, with smeared red lipstick, tells stories that usually end in catastrophe as a result of being drunk or high. Gabby is a hard-partying girl who the audience can’t help but worry about.

Gabby arrives in Israel and is greeted by a world of differences in her Orthodox roommate Shoshana (Lauren Schaffel), who is unpacking meat plates in observance of kashrut, or keeping kosher. Gabby and Shoshana can’t help but stumble over their every interaction, disappointing both consistently; this isn’t the soulful semester abroad that they had envisioned. However, Gabby is keen for an adventure, and begins accepting Shoshana’s invitations to pray at the Kotel (the Western Wall), which reintroduces her to her religious roots.

At Shabbat dinner at the home of Rabbi Abrams (Harrison Friedman) and his wife Yael (Elana Gantman), Gabby confesses that the death of her sister Allie is what made her turn away from religion. She soon learns to channel this negativity into a second chance, and finds such intense solace in rediscovering Judaism that she becomes Ba’alat Teshuva—a non-religious Jewish person who has “returned” to G-d in all traditionally observant aspects. She begins dressing modestly, desires to be Shomer Negiah (abstaining from sex or touch with a significant other until marriage), and easily puts her iPhone away for the entirety of the Sabbath. Noah (Chris Stahl), her boyfriend, feels betrayed, and her secular family is horrified, feeling as if they are losing a second daughter. Despite having turned away from drinking and drugs, Gabby finds her world collapsing.

Tackling a play with such a specific environment will obviously be challenging when given festival limitations, though the music used throughout Observance is nicely immersive. However, some moments involving props and large set transitions become somewhat distancing, even alienating. The actors seem particularly overwhelmed by the props in a gratuitous moment where Gabby and Shoshana sit on a park bench, drinking from coffee cups with Hebrew lettering; the "business" with the cups takes away from an otherwise dramatic scene (when Gabby decides to become Shomer Negiah). Perhaps a stronger directorial hand would both improve the clumsy transitions and help make the actors' prop-work less distracting.

However, it is fascinating to witness a narrative on a topic that we usually find in reverse: most modern stories cover a family coping with a child leaving religion, not a family horrified by their child’s returning to religion. As a result, Observance delivers thoughtful, if heavy-handed, arguments that bridge the gap between Orthodox practices and the practical modern world. Audiences curious to explore their own connection to Judaism—myself included—are surely in for a good think as they leave the theatre.