No Sympathy for the Wolf

Off Off Broadway, Musical
Runs through 10.24.18
FringeHUB, 685 Washington Street 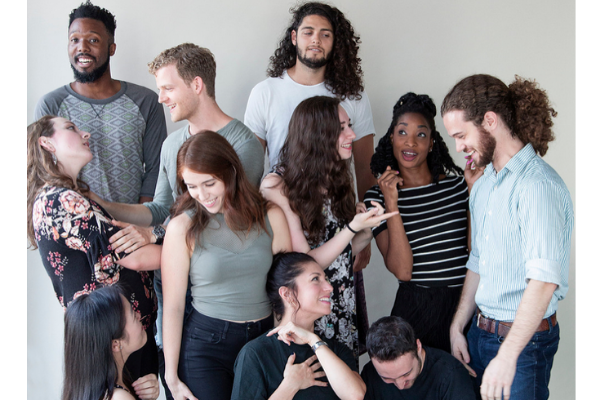 The cast of No Sympathy for the Wolf. Photo by Celine Grouard.

BOTTOM LINE: This engaging new musical tackles, with both edge and empathy, what happens when the Boy Who Cried Wolf, the Three Little Pigs, and Little Red and her Granny team up to take vengeance on the Big Bad Wolf himself.

A snarkier, 21st-century Into the Woods, No Sympathy for the Wolf checks back in with the victims of the Bad Big Wolf a few years down the road. A plot to put the Wolf (Chance Brayman) in his place once and for all has just been unfurled, led by an alcoholic Granny (Katie Mack), a depressed little pig (Sammy Ferber), an ostracized, bitter Boy Who Cried Wolf (Brendan George), a thrill-seeking, rapping Duck (Pearl Taylor) (from Peter and the Wolf) and a jaded Little Red (Libby Anderson).

Maridee Slater's minimalist direction makes the most of a venue with limitations, allowing the focus to fall on Scott Mebus’ heavily amplified score, and that’s, as the Wolf might say, all the better to hear it with. Many of Mebus’s songs features appealing, catchy pop-rock hooks, played here by a grooving, five-piece band, and the impressive cast’s stellar vocals make up for some of the less polished lyrics. Mack’s riffing Granny, Mike Kinzer’s swaggering Woodsman, and Lina Marie’s sweet-voiced Mom sound particularly excellent throughout. It’s a clever touch to have the Boy Who Cried Wolf as the narrator, especially as played here by the appealing George, offering a nuanced performance.

While Brayman’s strong vocals and intimidating presence are highlights, the show never fully explores either why the Wolf has been so unpleasant all these years or what, if anything, the Wolf stands for, psychologically speaking, in his victim’s psyches. But when the powerful Anderson sings “That girl who walked in the wood/‘Cause of you, she’s gone for good/But you won’t take another thing from me,” Mebus’ positioning of Little Red as a woman confronting her assailant resonates convincingly.

Even with all the familiar fairy tale re-tellings and mashups—not just Into the Woods but also Shrek, Hoodwinked, and others—Mebus’ vision still manages to carve out its own gently sardonic little niche. Future iterations may tighten the balance between crass, dark humor (mainly in Mebus's often-witty book) and the darker, more complex undercurrents (mainly in the songs), but No Sympathy for the Wolf is already a well-sung and compelling walk in the woods.

No Sympathy For The Wolf is by Scott Mebus. Directed by Maridee Slater. Lighting Design by Niklas Anderson. Music Direction by Ethan Wagner. Stage Manager is Lindsay Warnick.