Off Off Broadway, Docu-theatre
Runs through 10.23.18
FringeHUB, 685 Washington Street 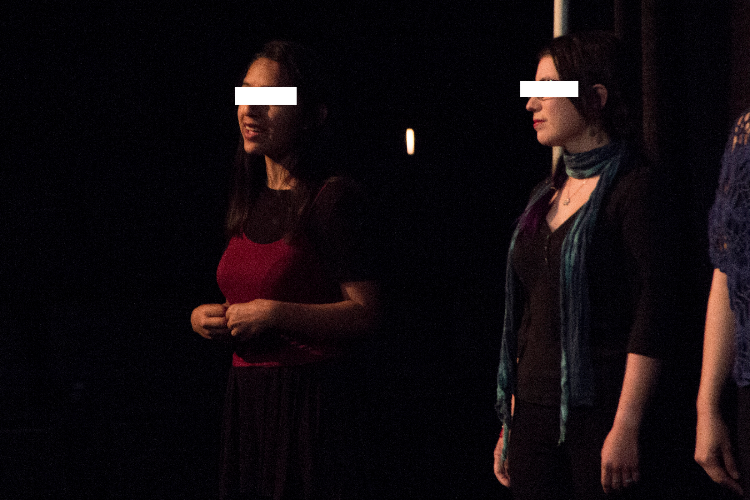 Some of the anonymous cast members of Crawling with Monsters Now. Photo by Anonymous.

BOTTOM LINE: A hard-hitting docudrama about the terrifying lives of residents in the Mexican state of Tamaulipas.

This is not Latino Theatre Initiatives’ first festival—they have been touring shows at festivals across the country for years. Crawling With Monsters Now is an updated version of a piece that transformed the theater company’s mission. New York Fringe audiences are presented the most up-to-date footage and stories about the under-reported humanitarian tragedy happening in cities just across the Rio Grande, in the Mexican state of Tamaulipas.

For this theater company, a group of anonymous (for their safety) students from the University of Texas Rio Grande Valley led by their devoted professor, it all started with children’s theater. After successfully bringing a children’s piece to adoring young audiences in the USA, they decided to schedule their text tour date to nearby Reynosa, just across the border. Their request was met with a categorical “no” from the school, who warned them to stay away from this lawless and extremely dangerous region. The young creatives who had just spent months surrounded by thousands of kids asked the obvious question: “How are the children doing? The ones who can’t see our play?”

This question, and its difficult-to-obtain answers, are at the heart of Crawling with Monsters Now. The company, armed with open hearts and ears (and even a spy camera) went down to Tamaulipas and collected videos and testimonials from residents of the state where even reporters don’t go. In fact, the theater company was contacted by a local reporter who was curious about their findings. Lacking any real press, most residents rely on social media sites, where they share news of missing persons and areas to avoid.

Though the play might be called more presentation than theater, it has a tremendous impact. The company —dressed in all black—carries the heavy weight of relating the stories and information from an area so often forgotten by the rest of the world. The performers recite testimonials with tremendous heart and ask us to bear witness to what they know, what they’ve seen. Thanks to a hauntingly beautiful singer and mariachi guitarist, the company also reminds us of the beauty present in Mexico. The kidnappings, torture, and warfare in Tamaulipas exist, it is true. But they do not take away from the nourishing and abundant culture of their home country.

Crawling with Monsters Now is a difficult piece to watch, but it is an important one. The Latino Theatre Initiative takes their task of raising awareness very seriously, and their heartfelt, enduring call to action is remarkable. It's a gripping reminder of the responsibility of theater-makers and of the power of live theater.

Crawling with Monsters Now is by Anonymous, from interviews. All cast and crew remain anonymous.