Off Off Broadway, Play
Runs through 10.26.18
FringeHUB, 685 Washington Street 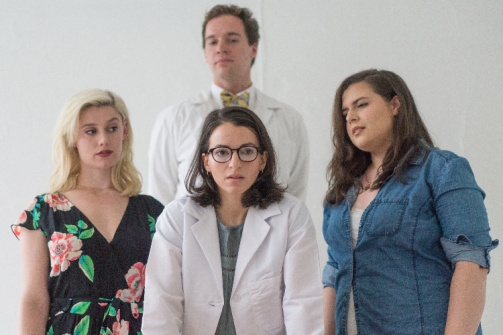 BOTTOM LINE: Emotionally powerful, if occasionally heavy-handed, play about moving on after loss.

Cracks, the latest installment in Jacob Marx Rice's acclaimed trilogy of plays about suicide, is well-written but undercut by a twee surrealism and repetitive dramaturgy. It tells the story of an aspiring scientist, Nicole (Anya Krawcheck), who cannot move past the painful memories of her late girlfriend Allie (McLean Peterson), who committed suicide. When a potential new relationship with Kat (Wilson Douglas), a funny app-designer, beckons, Nicole considers moving on. Her memories, however, threaten to hold her back—despite encouragement from the ever-present Humpty Dumpty (Benjamin Russell), a white-suited, British-accented version of the nursery rhyme figure who haunts Nicole’s imagination.

Humpty Dumpty reflects Nicole’s scientific interest in eggs. The focus of her PhD is “reversing the nature process in ovum proteins”—she aims to turn back time and bring cooked eggs back to life. She can’t bring Allie back, but maybe she can help humanity through some time-reversing science. Humpty Dumpty watches over Allie as she does her experiments, relives her painful relationship with the late Allie, and tries to strike up a relationship with Kat. Benjamin Russell makes an engaging presence as the wry, arrogant egg-man, but the character’s constant aphorisms keep repeating the same emotional beat that Nicole needs to rebuild her life. While repetition is to be expected in a play about a woman constantly reliving the same memories, the play tends to repeat emotional beats in a way that adds no new information, from Humpty Dumpty’s deliberately twee bon mots to Kat’s attempts to disarm Nicole with jokey self-deprecation. The play tends to underline important themes and character traits in a way that can be frustratingly obvious. Still, the play resonated with the audience on the afternoon I saw it, many of whom wept.