Off Off Broadway, Solo Show/Cabaret
Runs through 10.21.18
FringeHUB, 685 Washington Street 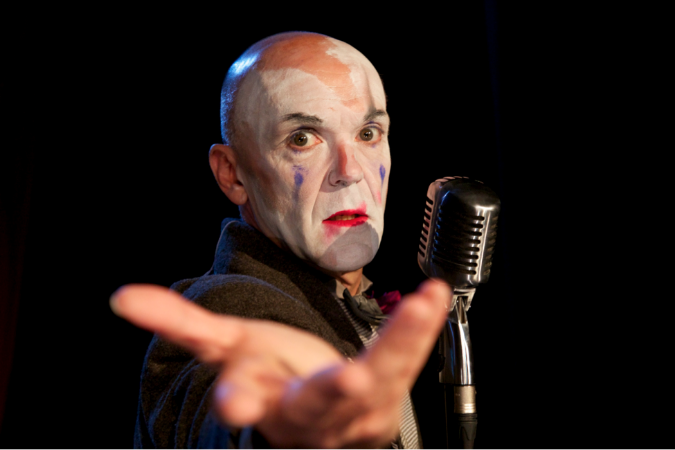 Bremner Duthie in 33 (a kabarett). Photo by Alexander Howe.

BOTTOM LINE: Set around one of the darkest times in modern history, 33 (a kabarett) makes an eerie parallel to 2018.

33 (a kabarett) opens on a dark, trashed stage. A man (Bremner Duthie) rushes on, and discovers his friends and his home, this cabaret theatre, have both been taken from him in one fell swoop. He spends the rest of the show manically jumping as quickly from language to language as he does from fear to anger to apathy as he decides to go on with the show. He takes on all his compatriots' roles, from funny man to song and dance man, struggling with the choice to either continue the performance or flee from the space for fear of being caught.

Bremner Duthie’s show is inspired by the Eldorado Club in Berlin, which once featured performances by the likes of Marliene Deitrich, and was taken over by Nazis in 1933 and used as one of their local headquarters. Duthie brings the audience into his world by addressing audience members directly. He thanks us for braving the checkpoints and the pat-downs to come and see his show. However, he flits from German to Spanish to Italian to English, leaving the audience in the dark (literally and metaphorically) as to when and where this show is set. Although the show isn’t definitively set in 1933, there is much attention paid to the details within the set dressing and props, with period-defining pieces like a woman’s shoe or a flashlight.

The program notes state that 33 “asks the question: ‘if the voices of those around you have been silenced, will you continue to speak up?’" 33 (a kabarett) feels like a warning, one that would seem to be all too relevant in the “post-truth” Trump Era. Yet although I was ready to be moved by this show, and while it felt like Duthie had done his research, I couldn’t quite connect. Perhaps this was because of the upbeat classical piano being played in a nearby venue throughout the show (the difficulties of FringeNYC), or because of the quieter audience, or the choice of songs (which I'm not sure are ideal for what Duthie is trying to achieve), or else the slight hint of fatigue in Duthie’s voice. Or perhaps I am desensitized from the unprecedented national strife, and from living at a time where the warning this show presents has gone largely unheeded. I was much more impacted by Duthie’s post-show speech, where he speaks to the audience as himself, leaving me with some final thoughts that lingered for the rest of the night.

33 (a kabarett) is written and performed by Bremner Duthie. Original direction by Dave Dawson; New Direction by Joseph Furnari. Choreography by Julie Tomaino and Tracy Darin. Dramaturgy by Caroline Russell-King and Rob Burns.