Written and Performed by Mac Welch; Directed by Brenda Welch
Produced by Me & B Productions
Part of the 2016 New York International Fringe Festival 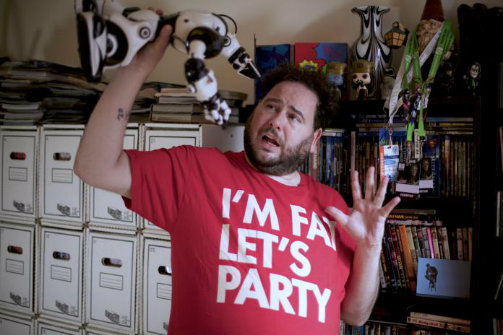 BOTTOM LINE: Zero Population Growth is a witty commentary on the incredibly messed up world in which we live.

Take all of the awful and scary parts of our life and put them on stage—now you have Zero Population Growth. Never before did I think facing all the worst parts of our society could be so fun. Mac Welch transforms into five incredibly different people in this fast paced, one-man comedy.

First we are faced with an outgoing, rehearsed tour guide from the “Milky Way’s premier industrial theme resort” (i.e., our planet). This character goes through all of the ways we can have fun on Earth—“cherry scented Oxygen,” “chocolate covered salad,” and of course enjoying the “three governments” that dominate our planet. Next, a gun-selling southern hick tells us all about his views on guns and politics. Third is an overly masculine self-proclaimed “beef cake," who hits on everyone in the room while insisting that size doesn’t matter. The fourth character is a little more serious, and has a mental breakdown over his violent actions that cannot be undone. Finally, we meet an alien-obsessed geek trying to contact other life forms to insist that humans are much better than his recently abducted friend Larry. In between each of the vignettes are video clips of a familiar-seeming senator (also played by Welch) who wants to “Make America Beautiful Again” and who vehemently claims he is not racist, not sexist, and a great politician.

With no set and minimal props, Welch breathes real life into every character in Zero Population Growth. Even though he seems nervous as he fumbles between sentences, Welch brings a powerhouse performance as he becomes five incredibly distinct people. Between his writing and performance, each character is immediately recognizable, from the man who just wants to protect his right to bear arms, to the sleazy beef cake hitting on all the girls despite living with his mother. And uproarious laughter is clearly the goal here (a goal often realized the night I saw the show), as Welch puts away his dignity for the sake of humor. Somehow, this commentary on life is both outrageous and thought-provoking.

Zero Population Growth is written and performed by Mac Welch. Directed by Brenda Welch. Lighting and Sound Design is by Amber Malott. Graphics are by Sleever Vatter.