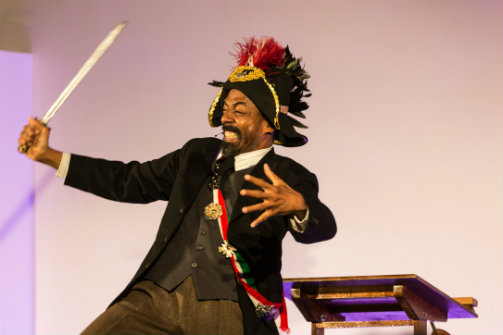 Brian Richardson in W.E.B. Du Bois: A Man For All Times. Photo by Justyn Richardson.

W.E.B. Du Bois: A Man For All Times, a biographical one-man show by Alexa Kelly, is a lesson in American history as much as it is a study in character development. In this play Du Bois—a civil rights icon played with big-hearted fervor by Brian Richardson—recounts and often reenacts the odyssey of his own life. He draws on his promising ambitions as a young Harvard University student (the first African American in this position), as well as the harsh rejections that gradually awaken him to his own circumstance.

Kelly’s play is heavily researched, and this is supremely evident as Richardson lets us in on musings and anecdotes that even model American History students will be enthralled to hear. This bounty of information will not deter the engaged audience member; Richardson extends a warm invitation to both delight in his successes and mourn with him the unavoidable losses. The specificity of Kelly’s research matches the exactness of her language. Richardson’s oratory is part Kelly, part Du Bois, and after a while it becomes difficult to tell when the citations end and Kelly’s faithful rhetoric begins. They blend effortlessly into each other, as if to say “do not forget that this man is a distinguished author,” while giving us access to his outsize persona in the flesh.

One could be forgiven for having some trouble immersing completely in the experience. Powerful, humbling anecdotes can shift abruptly into new scenes that take place many years later, giving audience members little time to appreciate the impact of what they just witnessed. Occasionally, this distancing serves a larger dramaturgical purpose. In a few instances, the jarring switch from one era to another helps instill a grander sense of history. These sudden shifts in time can add decades of distance to the few feet which separate Richardson from the audience. We appreciate the epic nature of a life’s mission, enacted over multiple generations, all heralded by this outspoken giant as his figure wrinkles into old age.

What is remarkable about A Man For All Times is that Kelly’s play handedly describes a man for our times as well. In an era where the value of black lives has regrettably been an open question, we face a figure who, though managing challenges unique to his time, is forced to confront his value as an American citizen and a figure in the black community. The end of the play sees Du Bois coming into conflict with other leaders of the Civil Rights movement, and he retires to Africa once he realizes the futility of progressive dreams. As a well-respected scholar in Ghana, Du Bois can fulfill many of the farfetched ambitions born of a man ahead of his time. In an elegy to his stalled civil rights efforts, Richardson reminds us that Du Bois’ birthday was once a national holiday in China. In comparison, he remains a relatively obscure figure in the nation of his birth, a nation that ultimately passed on his offer to lead the charge for black equality. In a prophetic quip on his never-ending struggles, Richardson, wounded from experience, cites Du Bois, “Sometimes people can only hear your color.”

The cast is Brian Richardson.