Off Off Broadway, Solo Show
Runs through 8.23.16
VENUE #4: Abrazo Interno at the Clemente, 107 Suffolk Street 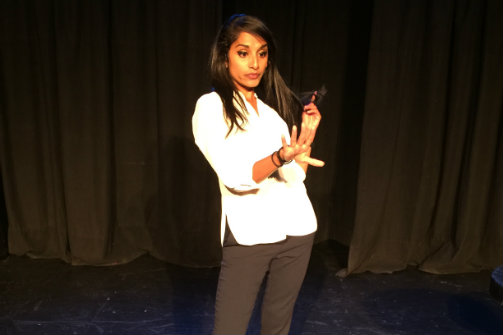 BOTTOM LINE: British Indian Treya hilariously stumbles through several wretched speed-dates, revealing the true depths of the sorrow and loss which lie beneath the humor.

Shyam Bhatt knows how to make a first impression! As the title character in Treya’s Last Dance, Bhatt bursts into the room clad in classical Indian dress as she expertly dances to the vibrant Indian music filling the room. She exudes strength and grace, however as the melodies continue, her confidence visibly wanes. Her face falls as her motions becomes unfocused and awkward.

This arc of explosive energy followed by uncertainty proves to be a theme which repeats itself throughout the production, and what better metaphor to describe the combination of romance and the immigrant diaspora? The impersonal speed-dating world provides the perfect opportunity for Treya (Shyam Bhatt) to prattle on about her life and make cringe-inducing blunders. With each invisible contestant Treya’s story unravels, revealing the reason for her odd behavior: the person she loves the most is gone.

As Treya’s mask of quirky inelegance slips, she recounts the tragic story of her beloved brother’s struggle to exist in a world of old-world conservatism when surrounded by British modernity. Treya explains how the closeness of a community can become deadly when cultures clash. Her grief is so strong that she cannot even bear to say the name of the person she has lost; her heart-wrenching grief is palpable.

Shyam Bhatt has a gift for crafting well-defined characters in her invisible city. From the judgmental Indian grandmother, to the dodgiest suitor in London, to the emotional and enchanting Treya, Bhatt excels in creating a world of diverse people even though there is just one person on stage. Although It is a pleasure to watch the journey of her characters as she moves from the comic to the profound, there are shifts which happen too quickly and the foreshadowing borders on excessive. Perhaps this is because fifty minutes is an insufficient amount of time for a production with ambitious themes like culture shock and young death. There is no doubt that there is enough existing story and talent to keep the audience captivated, and a longer run time would ultimately benefit the piece. Bhatt is aided by Kate August's skillful lighting design, which expertly transforms the small and sparse playing area. One memorable scene compliments Bhatt’s absolute fury with interchanging lights used to create a devastating effect.

It’s been said that a foreign accent is a sign of bravery. In Treya’s Last Dance, it is evident that this bravery is strongest when supported by compassion and humor.