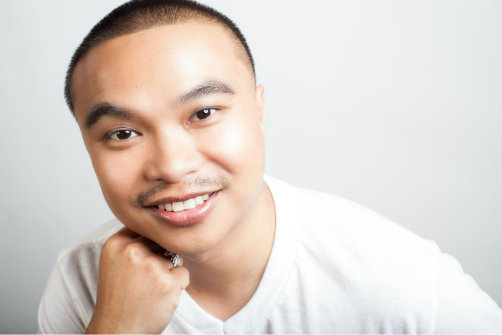 BOTTOM LINE: A movement- and media-heavy solo show about the consequences of gentrification and an inflated NYC housing market.

Transcend is an autobiographical one-man show about Kilusan Bautista's struggle to find an affordable apartment while attending Brooklyn College. Through an expressionistic movement vocabulary, urban/hip hop-inspired projections and sound design, and anecdotal storytelling, Kilusan relays his experiences with greedy landlords, gentrification, and limited relief for hustling artists in NYC. His writing is part long-form poem, part political statement; it entertains with its witty metaphors while conveying the agony of homelessness, even if it is a little heavy-handed in its message.

Throughout the piece, Kilusan continually refers to his MFA degree concentration at Brooklyn College: Performance and Interactive Media Arts. The lightning-fast FringeNYC tech schedule makes it difficult to pull off media and projection stunts that would really show off Kilusan’s skills. Still, in a dance studio with all-white walls, transmedia director Wi-Moto Nyoka and visual artist Siriphong Tipayakesorn, in collaboration with Kilusan, put on a vibrant low-tech projections display that creates the backdrop for the entire performance. It is particularly chilling to see Kilusan, whose white costume pieces become an additional projection surface, become engulfed within his projected NYC surroundings, as though the city itself is swallowing him whole.

In terms of performance, some of Kilusan’s strongest acting moments occur when he portrays dialogues he’s had throughout his housing crisis. Particularly in portraying his father and an anonymous landlord, Kilusan’s performing talents are best showcased in the dramatic switches he makes between his own voice and physicality, and the voice and physicality of his “scene partner.” Given the lack of raised seating and the substantial amount of choreography Kilusan performs on the floor, though, I would highly recommending sitting in the first row and/or along the center aisle of the theatre in order to enjoy Kilusan’s full performance.