To Protect the Poets 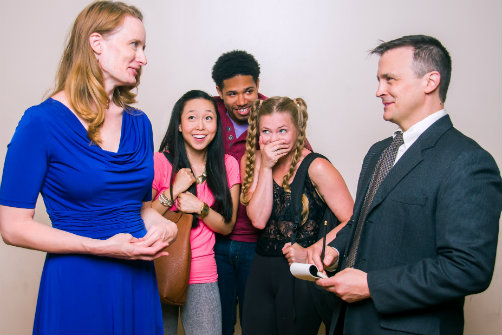 BOTTOM LINE: To Protect The Poets is a beautifully written and crafted production that will stay with you days after seeing it.

There is so much that happens in life and love that can break a person’s heart. To Protect The Poets takes you on an emotional journey following the relationship between Mac, a poet/teacher (Elizabeth Alice Murray) and Jab, a policeman (John Isgro). The play deals with themes of morality and law vs. justice. What beliefs are you willing to surrender to stay with the person you love?

A local rape and murder launches the story into action as Jab and his partner Bear (Jamil A.C. Mangan) set out to bring the culprit to justice. Upon questioning citizens in the neighborhood, Jab meets Mac and their relationship quickly sparks. Mac is a teacher who idealizes books and morals, and she uses literature as a way to instill hope into her "drop-out" students Jamal (Deshawn Wyatte), Courtney (Joy Donze), and Mingzhu (Ariel Kim). In the meantime, Jab and Bear track down a suspect (Angel Dillemuth) but when Jab decides to take the law into his own hands it causes a potentially fatal rift in his relationship with Mac.

John Doble’s characters are masterfully written. They all have a clearly defined identity and point of view, each with a recognizable arc within the play; by the end they are not the same people they were at the beginning. This shaping and molding of the characters happens in a way that feels natural within the world of the production. Never does a character’s growth or change read as a deliberate writer’s choice, but instead as an inevitable consequence of the circumstances.

The latter is obviously helped both by Alberto Bonilla’s clean and sharp direction and by having the text be supported by a stellar cast. Each cast member brings something unique; their talents play a major part in creating the intrinsically layered world in which this story takes place.

Murray’s performance has lingered in my memory—perhaps because her character undergoes the biggest transformation, thus requiring of Murray a higher level of emotional commitment. There is one moment where Mac is completely broken, clutching a table, sobbing. More than anything else it was the rawness of those sobs—the honest portrayal of real emotions within the context of a play—that have stayed with me.