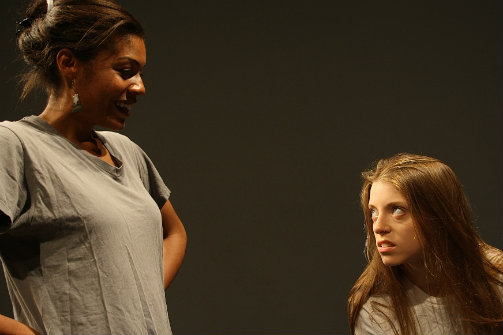 Typically, when a show opens on a young girl in a hospital bed, the audience can expect their two hours of show time to be filled with the saccharine tragedy of an angel who passes on too soon. However Morley (Goldie Flavelle) is no typical sick youth. Within the next five minutes, we see her physically take down the hapless clown (Harrison Scott) sent to cheer her up and beg her nurse (Alexandria Churchwell) to let her watch Cannibal Holocaust. Rather than an innocent sweetheart, Morley is a sadist in immense personal pain.

Thud! chronicles Morley’s toxic relationship with Tad, the unnaturally clumsy clown whose bumps and slips are the only things that can make her laugh. When Morley discovers Tad’s addiction to pain pills, the two work out a system in which he hurts himself in exchange for the medicine she refuses to take. As Morley’s prognosis worsens, however, her demands on Tad begin to increase, leading to a frightening and emotional climax.

The slapstick physical humor of this show, which could easily risk being gimmicky and sometimes feels repetitive, is balanced by the provocative writing and the incredible talent of the actors on stage. Despite literally being a clown, Scott’s portrayal of Tad is sensitive and nuanced. Flavelle’s Morley manages to maintain our empathy, if not pity, no matter how far toward the monstrous she tends. Churchwell, who has the least stage time, fills each scene she is in with a warmth and love no one else in the world of this play even seems capable of. It’s these performances coupled with the near constant barrage of quick-witted dialogue that really keep you on your toes until the end. The very final moments of the show are predictable, with it being hard to imagine things ending any other way, but the journey there is an enjoyable one.

I would be remiss to discuss this show without also mentioning the live Foley sound effects. At the very edge of the stage sits writer/sound designer Dan Rider, armed with a litany of sound-making tools. Every trip and fall is emphasized by a slide whistle, Vibraslap, or even a bucket. While not always perfectly timed, the goofy noises highlight the cartoonish nature of violence in the show and help the audience distinguish between comedic suffering and real pain.

Overall, the problems of Thud! are easily overlooked in light of the enjoyment it provides. Anyone who’s tired of too-sweet sick children or who wants to see a clown get hurt is especially encouraged to attend.

The cast is Alexandria Churchwell, Goldie Flavelle, and Harrison Scott.