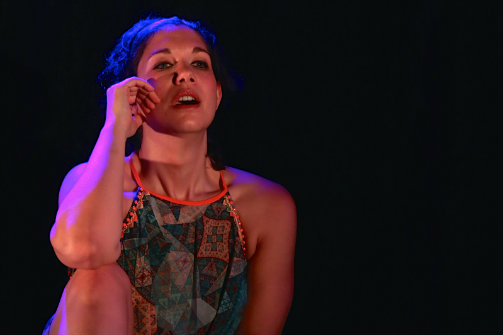 BOTTOM LINE: Thread is a non-linear, dreamlike collection of monologues exploring the connection between social media and world events.

Thread begins with lights up on Mischa Ipp, the sole performer, as she plays an invisible harp accompanied by music playing in the background. She launches into an engaging monologue about her journey to the harp, pausing intermittently from her playing to check her iPhone, which rests at her side. She defines the critical connection between the two objects that occupy her attention: the flick of the thumb.

Ipp then moves fluidly, and seemingly randomly, through time and space, reliving events loosely connected to a single “like” on an ex-lover’s Facebook post. She switches between playing herself and playing other characters. The set, consisting of two bare tables and a folding chair, is transformed through Ipp’s actions into a subway car, a bedroom, a JCC community room, and other assorted locations.

While the concept and stated intentions of writer-director Elena Zucker's play are intriguing, the through-line and main theme are lost in the wide-ranging, surreal, and disconnected places that the character goes. There are entire intense, emotionally charged monologues that I struggled to find relevance and meaning in. At times, seeing Thread is like watching a person relive a dream, omitting nothing.

Despite the confusion that Thread can produce, Ipp’s performance is interesting and committed. The myriad of emotions and experiences that she is able to communicate kept me engaged, even when I was unsure of the purpose behind what she was saying. Some of the material is dark, uncomfortable, and emotionally challenging, but Ipp forges fearlessly through it all. The bravery that it must take to perform solo in a play that touches on controversial topics and brings forth raw emotion is highly commendable.

Thread is written and directed by Elena Zucker. Performed and produced by Mischa Ipp. Lighting Design is by Zach Murphy. Sound Design is by Daniela Hart. Music is by Zach Brock.