This Gonna Be On The Test, Miss? 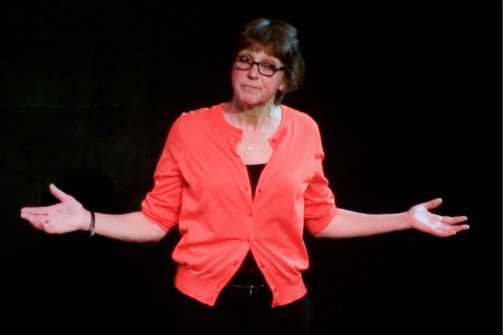 Ronna J. Levy in This Gonna Be On The Test, Miss? Photo by Steven Speliotis.

BOTTOM LINE: For all actors who find fulfillment through their survival jobs, this show is for you.

Ronna Levy never meant to be a teacher. Yet somehow, she’s been one for over 20 years. This is the premise upon which Levy’s one-woman show This Gonna Be on the Test, Miss? is based. At first, she addresses the entire audience as if we are her students. “Good morning, class!” “Good morning!” we all answer (in the middle of the afternoon, or even evening). For the first scene, we are transported back to a community college in Los Angeles in the early 90s. Over the next hour, we will be taught the story of our “teacher’s” tumultuous journey from wanting to be an actor to becoming, well, a teacher.

Levy uses minimal sound cues and no set besides a single projection screen. Throughout the show she projects images of past students’ work, news clippings, and images from when she first began teaching, and, in complete opposition, audition sides. We watch as Levy struggles with a need to “be somebody” and “do something.” She feels conflicted taking a teaching gig as a survival job when what she really wants is to make her mark as an actor. In a rather obvious, yet effective, manner, Levy shows and performs commercial audition sides for things like “Spic N Span” in between telling stories of struggling students working 60-hour-a-week jobs to be able to come to class and support their families.

As you may have guessed, it turns out that twenty years later, Levy is fulfilled by her teaching career, and feels she is making a difference in the lives of her students. Although she never actually comes out and says it, the "moral" seems to be that it's the students who are the ones who really make a difference in the teacher’s life. But, as with so many clichés, there is truth to this: teaching and helping others can be rewarding.

What’s harder to swallow is that Levy is doing a show about how she has found her true calling in teaching and no longer needs to act, a truth she communicates by, well, acting. Then again, perhaps Levy has found a way to have her cake and eat it too. What better way to use a summer vacation than to make a show about your teaching career?

This Gonna Be On The Test, Miss? is written and performed by Ronna Levy. Directed by Tyler Spicer. The cast is Ronna Levy. Projections by Ian McClain. Lighting by Susannah Baron. Stage Manager is Jennifer Davison. Original Projections by Caite Hevner Kemp. Original Sound by Elisheba.