The Troubadour Struck By Lightning 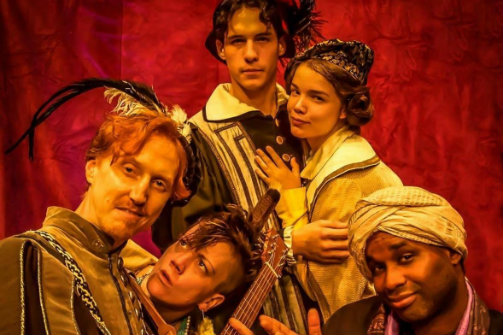 BOTTOM LINE: The Troubadour Struck by Lightning is a complex journey through religious history explored through the lens of male homosexuality.

The Troubadour Struck by Lightning is self-described as “a racy look at the music, poetry, heretics, and sexual deviance of the South of France circa 1325.” For those up to date with their study of 13th- and 14th-century religious movements, this play will present no challenge. For me, the show was entertaining but intellectually bloated.

Playwright Ed Malin presents a timeline in amusing sexual vignettes of the major religious players during the time of the Albigensian crusade—Pope Innocent III’s attempt to consolidate his religious authority by military means. Unfortunately, there were an awful lot of people playing with religion at this time. The play generally revolves around Manfred the troubadour as he travels through France and partakes in various homoerotic experiences. First he finds employment at a castle in the south of France. His conversation with the castle’s owner reveals a summary of the homosexual affairs of King Hakam II, his son Hisham II, and King Al-Mu’tamid. The scene ends with the troubadour and king in bed. And the play continues, as do the lessons—and the gay couplings.

The rest of the hour is filled with a series of encounters depicting the presence and role of homosexuality in the various religious clashes that took place during that time. Many complex stories are told, and new characters are introduced regularly. The actors are fearless, and make great use of verbal and physical comedy in every scene. The dialogue, however, can be quite dense, so I fear that many of the nuances and specific details are lost on the audience.

It seems to me that Malin is incredibly passionate about this rich history. However, the result is too much information crammed into a one-hour performance, and I am unclear what overall message he wants the audience to leave with.

The Troubadour Struck By Lightning is by Ed Malin. Directed by Janet Bentley. Choreography is by Tatyana Kot. Music Director is Andy Evan Cohen. Costume Design is by Janet Mervin. Lighting Design is by Gilbert Pearto. Dramaturg is Theo Dage. Stage Manager is Katie Astra Barnhard.