The Theatre Made in Paradise

Off Off Broadway, Play
Runs through 8.23.16
VENUE #2: Flamboyan Theater at the Clemente, 107 Suffolk Street 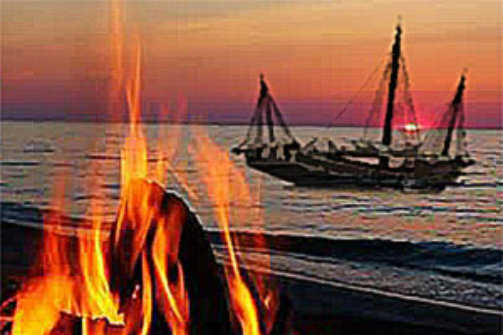 BOTTOM LINE: Using The Tempest as its spine, The Theatre Made in Paradise is a strong script imagining theatrical performance in the new world.

1619. Puritans arrive in the new world and bring a whole bunch of baggage with them, probably literally and figuratively. If you know anything about the seventeenth century, Shakespeare has just made his mark on the world and the Puritans are about to shut all that down. Lucky us, we get them over here too and they impose and colonize all these new morals on themselves and the natives, although not without a fight. “You taught me language and my profit on’t is I know how to curse,” says Caliban.

The Tempest is an appropriate backdrop for such subject matter, especially since some believe American colonization inspired Shakespeare to write it. There are some notable departures from Shakespeare's plot in The Theatre Made in Paradise; all are satisfying twists on our expectations. Jonathon Ward’s promising script invents Rebecca Stanford, played with curious optimism by Alexandra Templer Waldon, who throws off this repressive yoke to enact Shakespeare’s hot-off-the presses classic. And this production of The Tempest will star the slave brought over with her, Stephano Africanus (Sidiki Fofana), Puritan cast-off George Greene (a delightful Trinculo type, John Glowacki), and natives Massosoit (a likeable Paul Pontrelli) and Askamaboo (a nuanced Neysa Lozano).

Director Danielle Skraastad moves the play swiftly and organically. She also doesn’t allow any of the natives, Puritans, or slaves to become racist stereotypes, playing everyone with fairness and a standard American dialect. Massosoit and Askamaboo speak English that is understood by us, but deliciously misunderstood by the other actors in the scene. Skraastad choreographs an epic charades ballet as they try and fail to understand each other. Notably and appropriately, the white people misunderstand the word for stage to be “Mother Earth.” All the world is a stage I suppose.

Certainly Fringe shows should be cut some slack, though this venue is large and tends to swallow up the performances. And the actors can be hard to hear over the hum of some struggling, inferior air conditioner units. Get there early and sit close to be sure you don’t lose anything. And why is there an intermission in this short play? There is some good work happening here, and The Theatre Made in Paradise is an exciting, new script that I hope has a long life ahead.

(The Theatre Made in Paradise plays at VENUE #2: Flamboyan Theater at the Clemente, 107 Suffolk Street, through August 23, 2016. The running time is 90 minutes with one intermission. Performances are Sat 8/13 at Noon; Tue 8/16 at 2; Thu 8/18 at 7; Sat 8/20 at 7; and Tue 8/23 at 2. There is no late seating at FringeNYC. Tickets are $18 and are available at fringenyc.org. For more information visit sites.google.com/site/thetheatremadeinparadise/.)

The Theatre Made in Paradise is by Jonathon Ward. Directed by Danielle Skraastad. Lighting Design is by Rachele Holm. Sound Designer and Composer is Jorge Olivio. Costume design is by Catherine Fisher. Stage Manager is Marisa Kilgallen.