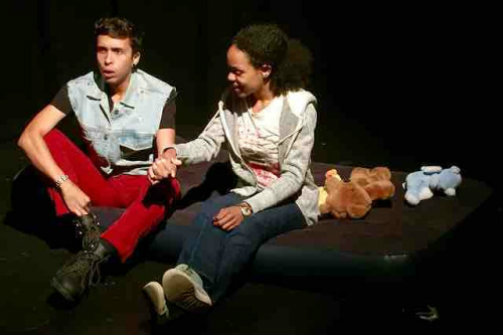 Chris Ogren and Yohanna Florentino in The Runaway.

BOTTOM LINE: A thoughtful drama based on a true story of a homeless girl mistakenly looking for love and family among the broken misfits of Grand Central Station.

Of the eight million people living in New York City, more than sixty thousand of them are homeless, including twenty thousand children. This staggering number only includes children living in city shelters, raising the question, how many homeless people really live in New York City? The true number is unknown, but some of the uncounted are those who live in the underground subway tunnels—the so-called “mole people." This subculture of outcasts have both rejected and been rejected by society, living in the vast stretches of unused track and scavenging for their survival.

The play opens with Jose (Yohanna Florentino), a verbose teen who speaks in a quizzical verse and spits tall tales with a carefree ease. Jose’s earnest demeanor unnerves the denizens of Grand Central, including a plainclothes officer, two elderly mole women, and an angry young hustler. Gradually, Jose’s persistence and generosity wears down her detractors and she is seen as an angel of mercy. Jose is the one who brings food to the women too frail and afraid to go to the surface. Jose is the one who imbibes pity from a veteran police officer and embraces the humanity in the most hardened of street thugs. Although Jose is the one who plays mother to this station of lost misfits, it is painfully clear that fragile Jose is also the one who most desperately needs parenting and love.

Florentino excels in her tender portrayal of this tragic teenager. Also impressive is Michèle Cannon, who plays Jose’s deeply flawed mother with sensitivity and vulnerability. Veteran actor Andrew R. Cooksey provides much needed moments of levity with his hilarious character of Lowanda, a saucy mole woman who opens up to Jose by letting her touch her most valued possession, a small travel iron which she insists will “iron out the wrinkles” in her life when she finally braves the surface and lives in a real house.

While The Runaway contains many moving and poignant scenes, there are times where the play becomes a bit too ambitious, particularly in its attempt to coalesce the heartbreaking story of homeless children with Greek mythology, including blind prophets and the river Styx. The Runaway shines brightest when it shies away from grandiose verse or historical allusions, because the soul of the play clearly resides in the compassionate storytelling and interactions of the lost children that playwright Donna Spector refuses to let us forget.