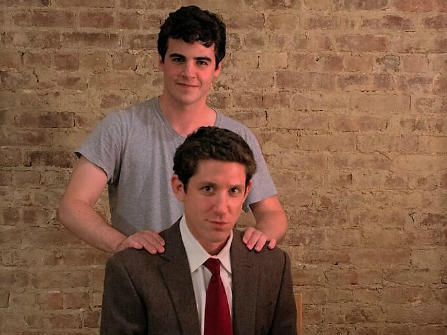 Ian Bouillion and Carey Seward in The Princemaker. Photo by Robert Gelberg.

BOTTOM LINE:  A psychological drama where a wealthy teenager explores "the politics of money and the money of politics" through sponsoring a rising-star congressman running for President.

Leslie "Les" Moore (Ian Bouillion) is a teenage one-percenter who has inherited his dead father's fortune. Les's father made a habit of funding various politicians, and was proud of never losing an election. Les continues his father's path, and chooses to support Congressman George Lee (Carey Seward) in his Presidential campaign. As George gains confidence from public support, Les surprisingly thinks differently, and begins to play mind games with George in a sequence of psychological threats. The cat-and-mouse dialogue is witty, but what is most interesting is not knowing who is the cat and who is the mouse in each scene.

As the action unfolds, it is unclear why George keeps showing up at Les's home and continues accepting his money despite his unpredictable threats and narcissistic behaviors. The plot then takes a downward turn when Les begins to show other ambitions of his own. Watch out for the surprise twist ending, where "the past can greatly damage your future" becomes very true in this political world.

The performances of both Bouillion and Seward are strong, the direction by Alessandra Affinito is well-executed, and the sound design by Stafford is appropriate to the drama. For those looking for political drama at the Fringe, The Princemaker is a good choice.

The Princemaker is by Robert Gelberg. Directed by Alessandra Affinito. Sound Design is by Stafford. Stage Manager is Kelcie Miles.

The cast is Ian Bouillion and Carey Seward.