The Night of Blue and Salt 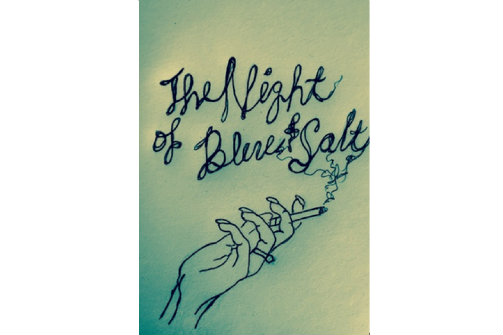 BOTTOM LINE: Love is a ticking time bomb, and we can talk about it now or wait till some-[kaboom!]

Jenna Langbaum's The Night of Blue and Salt is a play derived from her recent thesis at Hamilton College. The story looks at a couples' degrading relationship and how they both have learned to cope and exist with one another. The couple, despite their polarization and growing resistance, continues to stay together due to their commitment.

"Wife" (Jenna Langbaum) is loyal and has a colorful spirit. She is characterized as being manic and full of magic, and she finds this magic in the mundane throughout her time with "Man" (Andrew Gibeley). The patriarchal light of the piece seems to emphasize her place in the household and how she must continue to service her husband. Wife has aspirations—ones that soon consume her and everyone around her.

Man struggles to be happy while also dealing with the constant demands of his job. He wants to provide stability and order to his house and seeks to control what anyone does. He repeatedly mentions his doctoral profession, constant bragging that provides a little dark humor while alluding that Wife does not have his capabilities. Wife wants to write and often zones out while quoting passages of famous women writers, a clear inspiration for both the character and Langbaum herself.

Wife often sits in a big coat alone on stage smoking, while illuminated under a blue light as if we were in some intimate chamber of her heart, or the heart of Sylvia Plath. In these moments, presumably set in the future, Wife speaks grandmother-like to the audience in the hopes of touching our psyches to instill change. This serves as a nice contrast to the rest of The Night of Blue and Salt, which in many ways seems to express ideas of love epitomized by 1950s white America. But not in order to celebrate it—The Night of Blue and Salt goes to great lengths to present such 1950s-ideas as both futile and upsetting.

There’s a moment when Andrew Gibeley’s Man is yelling and channeling his frustration at the loss of his child at one audience member. It's a well-executed moment of brave acting, one requiring a huge amount of energy. But as good as the acting is, The Night of Blue and Salt does not have enough people working on it. The story is able to strike a chord because of its motifs, but the final execution does not live up to what could be a heartbreaking, even phenomenal, show. Still, the small team behind this piece are a force to be reckoned with.

The Night of Blue and Salt is written and directed by Jenna Langbaum.

The cast is Jenna Langbaum, Andrew Gibeley, and Anna Jastrzembski.