The Marks You Leave 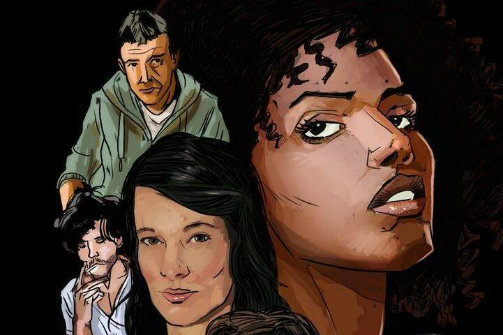 BOTTOM LINE: A play with many great moments, in which an older sister is shamed out of her home by her parents and tries to reconnect with the younger brother she left behind.

The Marks You Leave centers around Georgette (Kristina King), who was raised in a strict religious home and felt so unwelcome that she left for New York. When her brother Asher (playwright Tyler Andrew Jones) visits, she painstakingly informs him that she is a lesbian. Asher also wrestles with his own sexuality; since Georgette's neighbor Clark (Daniel Rowan) is attracted to Asher, everything comes to a head. On top of that, their conservative Midwestern mother (Rosemarie Mitchell) visits and all hellfire breaks loose.

To its credit, The Marks You Leave artfully tackles questions about sexuality, politics, and racism (especially in retail). The dialogue mostly rings true, so it's hard not to feel emotionally involved. Watching characters be overly coy in conversation can provoke the vicarious anguish of wanting to draw someone out.
The superb acting by Jones and Rowan creates a palpable tension between their characters. Their dynamic leads to some lovely, tender moments, like when Clark, who is out of the closet, sketches Asher, who is afraid to express his sexuality. But the play doesn't take itself too seriously, and humor breaks up the mood.

Simple wardrobe choices highlight differences in personality: Georgette stands out as the most prim in her workaday clothes, while her love interest Maggie (Rebecca Teran) seems loose in her gymwear. Kristina King brings Georgette to life in a nuanced performance. Whether conveying the dread of being rejected by a sibling or the deserved fury towards a crazy-making mother who has no boundaries, King plays each scene well. Her struggle to seek familial connection while believing she is better off without them gives her plenty to work with. Her companions step up as well, and make for a well-balanced ensemble. Part of the fun is in watching Georgette's girlfriend and neighbor playfully torture her into revealing her sexuality to her brother by dropping hilarious hints about what they all share in common. The dialogue is surprising, funny, and touching. And don't be surprised to pick up some edifying tidbits about Hawai'i along the way.

The early conflicts in act one build steam and create momentum, part of which is lost in act two, where a tricky plot twist and some heavy-handed ideas change the tone. However, the dramatic pitch rises as Georgette loses her composure while we continue to root for her.  Altogether, The Marks We Leave is an entertaining play where a number of characters struggle to love more than they are accustomed to.

The Marks You Leave is by Tyler Andrew Jones. Directed by Mia Crivello. Scenic Design is by Tanner Cosgrove. Costume Design is by Allison Dawe.