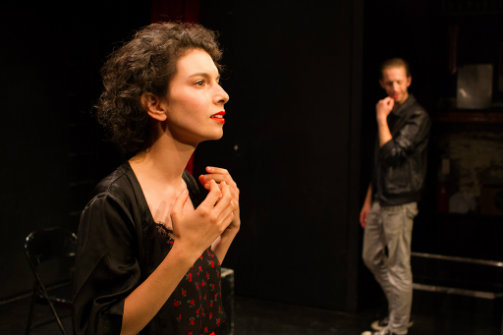 Emily Alexander and Nate Dobson in The Fucking Problem.

In The Fucking Problem, the porn industry’s “prom king and queen” expose themselves in a different way than one might expect. Two unnamed adult film stars, a woman and a man, shift the focus of their profession from what they do in front of the camera to the complex relationships that occur off-screen between those in the business of selling sex. In the already intimate space of Under St. Mark’s these stars tell all in a confessional style that breaks the fourth wall in the first thirty seconds and keeps it that way. It is not a drama in a conventional sense, with dialogue and plot, but this direct address structure serves the fast-paced script best as it quickly humanizes the bodies usually seen engaging with each other in a more carnal way.

The performances by the play’s two co-writers, Emily Alexander and Nate Dobson, are unapologetic. These two care about the message they are sending out and use up every second of their time to get their individual points across passionately. Jessica O’Hara’s direction is minimal yet effective in keeping these characters in their own respective worlds and on their own personal journeys to a powerful climax. A shocking twist brings the surrealism of the entire field into a stark reality that cannot be covered up with any pornography parlance. It’s all revealed, and the actors’ gaze makes it impossible to turn a blind eye.