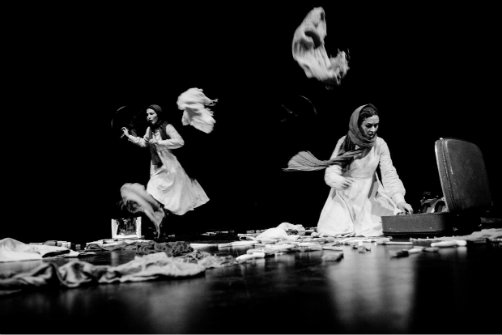 Hadis Miramini and Shiva Ebrahimi in The Door. Photo by Koroush Kalhor.

BOTTOM LINE: Medhi Mashhour’s experimentally structured The Door is a unique take on the immigrant experience.

One of FringeNYC’s international offerings, The Door comes from Iran’s Saye Theatre Group. It tells a story of the immigrant experience through the perspectives of two women who share the stage at all times, but never address one another. The first to speak (Hadis Mireminy) is a young woman who was born in Tehran and brought to New York City during her childhood. She reminisces about her birthplace, and cannot decide whether to stay in the US or return home (if Iran is in fact still her home). Her dream is to open an institute where she can teach English to children. In the play’s second half, it is an older woman’s (Shiva Ebrahimi) turn to speak. Her visa will soon expire and her greatest wish is for her child to be born in America. She waits and waits to hear back from her attorney (Benyamin Esbati), who remains an offstage presence.

The Door primarily consists of these two characters addressing the audience, and it almost feels like two solo shows with similar themes played back to back. Mireminy and Ebrahimi are more than up to the task here, bringing real passion and urgency to their performances. Periodically there are transitional, dialogue-free sequences, more in the “performance art” vein. The lighting changes and eerie music plays as the performers move about, pulling dozens of paintbrushes out of a fanny pack, for instance. Some of these sequences last several minutes, and comprise some of the show’s most challenging material. There are also some meta-textual elements, with the older character breaking the fourth wall and occasionally acknowledging the artificiality of the scenario. This is an unexpected touch that adds some interesting texture to the show.

This is a unique experience, and unlike others I have had at FringeNYC. Those interested in boundary-pushing theater will find The Door worth entering.

The Door is written and directed by Mehdi Mashhour. Scenic Design by Saeed Hasanlou.

The cast is Shiva Ebrahimi, Hadis Mireminy, and Benyamin Esbati.