The Coward: A Madcap Fairytale

By Maddy Campbell; Directed by Matt Phillips
Produced by The National Theatre of MatMadia
Part of the 2016 New York International Fringe Festival 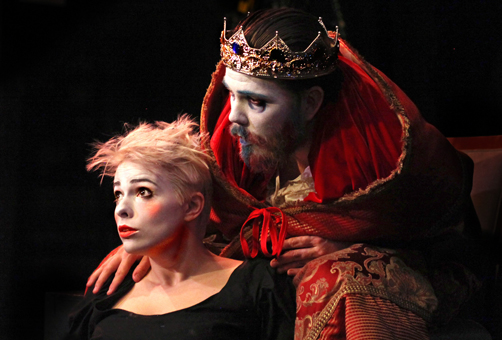 Maddy Campbell and Wester Cooley in The Coward: A Madcap Fairytale. Photo by Reel Duty.

BOTTOM LINE: The Coward is funny, relentless, and will make you uncomfortable in ways you never thought you could enjoy so much.

It's a tale as old as time: a kingdom plagued by unhappiness and discord is saved by their kindly king, who ushers in an era of unrivaled bliss and prosperity...by marrying a demon from hell to cast a spell on the populace which renders them stupid and compliant. The demon also puts drugs in the water supply and chains the king to his throne, ensuring that the demon's reign as queen—and the daily parties and festivals which he throws—will go on uninterrupted for three hundred years...until one of the king's maids becomes possessed by a monster in her head and proceeds to stab the king to death, beginning a process that will break the spell over the kingdom. If any of that sounds strange or confusing, don't you worry—we've barely scratched the surface of The Coward: A Madcap Fairytale.

This play is hilarious and disgusting and heartbreaking all at the same time. I found myself rapidly alternating between laughing, gasping, and cringing at the ridiculous antics taking place. And yet, for a piece of theatre that is so many things at once, The Coward is also very simple in a way I found quite beautiful. Making use of a set made mostly only of ladders, of props consisting largely of candy and toys, and of sound and projections that make no effort to hide the fact that they are purposeful design aspects, The Coward allows the incredible strength of the performers to shine through in every moment. Every actor onstage is so committed to this absurd, insane world that there is no challenge in suspending belief when the king knocks over his bucket of poop and a pile of wrapped chocolate bars pours out. The physical comedy is passionate and effortless, showcased best by the protagonist Willie (playwright Maddy Campbell), who switches back and forth between her true self and the monster in her head at the drop of a hat with such force and conviction that it's sometimes easy to forget that you're watching a whole scene unfold with only one person actually onstage.

The world of The Coward is deep and rich, governed by rules and mythology that are only hinted at over the course of the play. Every character is a peephole into another facet of life in this kingdom, from the castle guard who readily mutilates himself at the behest of his queen, to the almost omnipotent god, Mr. Crow, who watches each scene unfold from his perch atop one of the onstage ladders. And as the performers draw you in, you start to see the seams of the play in very purposeful ways. If a prop is forgotten backstage, it becomes part of the narrative. If a lighting cue is missed, the actors scream for their lights as they scramble around in the dark. And all of these moments, too, become natural parts of this dark universe of clowns and devils. The Coward earns its self-awareness through the obvious labors of love every member of the ensemble executes, as well as the nuances and expert timing of each beat, as directed by Matt Phillips.

I loved this play. It endeared me to every character, kept me guessing right up until the final blackout, and left me wanting more. The Coward doesn't pull any punches and thus is a bit graphic at times, but if you can stand seeing an actor pretend to get stabbed in the face, I promise you will love how red jellybeans spew from the open wound. More than all that though, what is great about The Coward is that it never tells you what to think. I honestly don't know what it's all about, or exactly how the ending fits in with everything that came before, but I left the theater asking questions of myself and the world around me, and thinking thoughts that made me smile—and that was a good feeling.