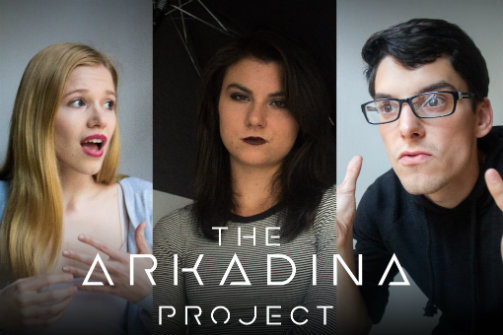 BOTTOM LINE: With an emphasis on fame and relationships, The Arkadina Project retells Anton Chekhov’s The Seagull through the eyes of three angst-ridden millennials.

Three blocks sit downstage center, and a large projector hangs upstage. As the Russian appropriation of Bon Jovi’s “It’s My Life” fades out, three figures creep onto the stage in darkness, and assume positions by their respective blocks. Spotlight on Masha (Ashley Kelley), a recovering drug addict attending AA who speaks to us both of her fierce love for Kostya (whom she has fondly termed “Sexy von Sexington") and her loathing of Kostya’s girlfriend Nina (“the blonde whore,” according to Masha). The spot turns off Masha and focuses on Kostya (Jon Steiger), whom we discover caught in the middle of the love triangle, confiding to his therapist about a disturbing dream. Finally, we meet Nina (Mikayla Orrson), whose interior monologue we receive in the form of a church confessional. And so begins The Arkadina Project, a primarily jovial version of Chekhov’s The Seagull.

Masha and Nina are involved in Kostya’s newest theatrical endeavor, an experimental production that involves Nina in a white unitard and Masha as a mysterious, shrouded being armed with a can of spray paint. The performance is live-streamed on social media (we watch as the performance is simultaneously played out in front of us and "live-streamed" on the projector upstage) but is not as popular as Kostya had hoped. Kostya struggles as a failed artist, a moniker that is doubly painful since he exists in the shadow of his mother Arkadina, a successful actress. When Arkadina is invited to appear on Conan O’Brien, Kostya accompanies her in an effort to showcase his production on national television. It’s a disaster. As the remainder of the play unfolds, Kostya battles his mommy issues, Nina becomes desperate for fame, and Masha copes with unrequited love.

It would be easy to fall into the trap of stereotyping these characters as The Goth (Masha), The Dumb Blonde (Nina), and The Tortured Artist (Kostya). But Masha, Nina, and Kostya are more cavernous than they appear: Nina—who sings nearly everything she says and boasts the screen name ninasparklejesuslover1995—is annoyingly naïve, but ultimately proves to have more substance than we give her credit for. Kostya spends most of his time whining, but he wins our hearts with his blunders, his bizarrely highfalutin speech-patterns, and his desperation to succeed. Masha has a bad attitude about everything, but hey, she’s trying.

This devised production hones in on Kostya’s contempt for his mother. I mean, he really hates her, as is evident by his excessive name-calling and his deliberate choice to release incriminating photos of her in compromising sexual situations. In fact, there’s a lot of misogyny going on in this show, and all characters—not just Kostya—partake. (Perhaps Nina is a bit more benign than the other two since she only refers to herself, and not other women, as a slut.) While I certainly honor that these artists wanted to push boundaries, I also continue to wonder why all the women in this universe are systematically deemed sluts, whores and c***s? The misogynistic aspects of the production may not have been meant to deliberately offend, but in the end, this perspective encompasses a notable portion of the text.

The writers of The Arkadina Project took a risk with a piece that plays more like a spoof than an adaptation. Chekhov die-hards might find its deviation difficult to digest; others may find it amusing. But the makers behind this production are well aware that it is, indeed, not for everyone. Nonetheless, with a retelling or modernization of an old piece, there is an opportunity to capitalize on the exigency of the story in its new context: why this play now? With The Arkadina Project, I wished to have a better understanding of the play’s stakes. But...there is one point this piece drives home: in the age of social media, Kostya’s problems are ten times worse.