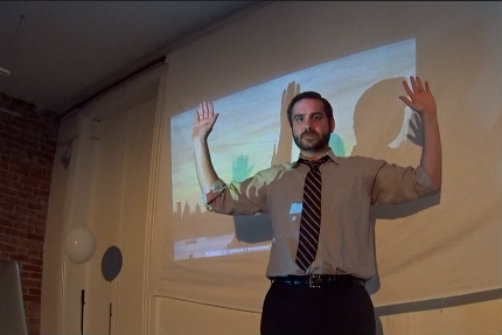 BOTTOM LINE: Target Goldberg is an inventive, thought-provoking show about surveillance, truth, and power that will leave you questioning your own beliefs and giving real thought to how our everyday lives are shaped by unseen forces.

The Truth is out there. Evocative and thought-provoking, Target Goldberg (Help! Rogue Government Agents are Trying to Frame Me!) will force you to question how power operates in the world. The show, which begins with writer-performer David J. Goldberg pacing around the stage, fervently speaking on a cellphone and then sharply popping a balloon, is a roller coaster of a solo show.

Goldberg, who we quickly learn is the titular Target Goldberg, speaks to the audience with a candid and sincere tone, explaining that he has become the focus of a worldwide secret war to control information, a battle waged by covert operatives and shadow governments who fight for global power. "This is real," he says, blurring the line between reality and performance. “I am a person like you.”

Explained with the aid of a series of websites and slides projected onto a screen, Target Goldberg presents an alternative narrative to the way of the world that we have come to take for granted. Data and information are the new currency, traded through cellphones, web search history, and propaganda. Shades of The X Files' Fox Mulder or Dan Brown's The Da Vinci Code color Goldberg’s impassioned performance. For all the audience’s resistance to his continued insistence, Goldberg is unwavering and wins the convictions of the room relatively quickly. Without giving too much away, he explains that his demographic identity, combined with an interest in watching YouTube conspiracy theory videos, has positioned him to be the perfect target for a plot to convince the public that the internet is radicalizing and dangerous. Through confusing twists and turns, which Goldberg explains beautifully, we come to learn that he stands on a tenuous precipice between good and evil.

The power of Target Goldberg is in its coherent internal logic. As they walk into the theater, audience members are presented with a piece of tin foil with the instruction that all cellphones must be wrapped in order to create a Faraday cage; the back page of the program shows how this can disrupt tracking and recording technologies. Goldberg explains why the show has been presented more than once (Target Goldberg premiered at the DC Capital Fringe Festival and also played at Dixon Place), noting that the more he can perform the show, the more plausible his deniability if the nefarious plot comes to fruition. Balancing heavy material with funny, self-aware lines, Target Goldberg plays with the expectations of the audience. For instance, the government agents Goldberg mentions are referred to as Agents Scully, Kramer, and Newman; he doesn’t know their real names, he explains, so these are his choices. “I’m not crazy, I’m an actor,” Goldberg remarks winkingly.