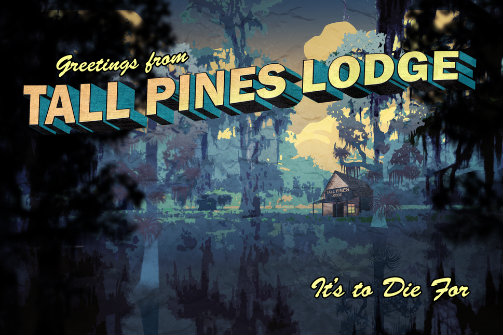 BOTTOM LINE: If you like violence and sweating in your seat, Tall Pines Lodge has got you covered.

Tall Pines Lodge is a one-act play that unveils the hyper-masculine and patriarchal societal idea of the American man, and how he might be pushed to feel, see, and do things beyond what he might normally do. Set in one room of a lodge with plenty of drinking going on, the plot revolves around three colorful brothers: Cotton (Titus Tompkins), Joe Ed (Conor Andrew Hall), and Booker (Ryan Scoble). And then there is the beautiful and feisty Daisy (Jehan O. Young), a mother taken hostage during a heist and smuggled back to the cabin.

Boys will boys, and the fraternal brotherhood often found in male relationships is explored here in Tall Pines Lodge. The three brothers range in personality and size, creating a dynamic that allows insight into relationships that are so raw they can be painful to watch. Cotton is frustrated with his brothers’ lack of care and reverence for him and all that he’s done to bring them money and a woman for their mutual enjoyment. Joe Ed is more thoughtful than the other two, and begins to question actions and becomes friends with an unlikely person. Booker is the not-so-bright one; his innocence and lack of awareness allow him to be a pawn in the other two brothers’ struggle for power.

At times, Graves' Tall Pines Lodge seems like it’s emulating what the typical guy acts like, perhaps edging more toward stereotype than reality. Live music is book-ended for the show by The Goodmorning Nags and creates a timeless aura of old Western America that is often seen on TCM. The two musicians—banjo and violin— serenade the audience with their folk music to set the scene. If you’re not a particular fan of violence, this show may not be for you. From multiple shootouts, blood, the misogynistic man-handling of women, and an R-rated feeling, Tall Pines Lodge feels reminiscent of a Quentin Tarantino film. But for those who enjoy (or at least don't mind) such violence, the manipulation and rage that fuel these characters create an environment that pulls you right in.

Tall Pines Lodge is by J.D. Graves. Directed by Joshua Hill. Music is by The Goodmorning Nags.