Swashbuckling Sam and the Tale of Blackbeard’s Revenge 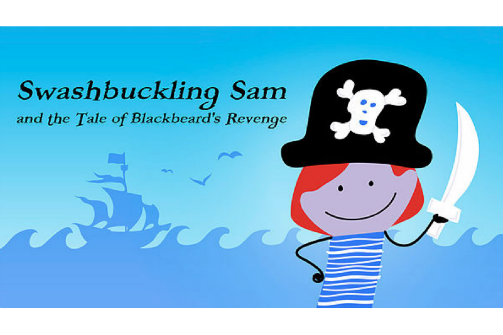 BOTTOM LINE: An imaginative adventure tale with a young girl hero who saves the day and fights some of her own fears along the way.

In the new play Swashbuckling Sam and the Tale of Blackbeard’s Revenge by Leonora Bernstein (her writing debut) we meet Sam (Kelsey Foltz) in the midst of a pretty rough day. Some classmates are teasing her over and over again about how badly she smells. They laugh and point and make up names—that is until the teacher shows up and suddenly they’re little angels and Sam, under pressure, chooses not to tell on them.

We quickly learn that Sam is going through more than just one bad day. Her best friend just moved away, her parents are getting divorced, and she’s living with her dad (the sweet and funny Trey K. Blackburn). It’s about as much as any seven year old could handle. So while her dad makes pizza for dinner Sam takes an imaginative adventure—placing herself at the center of a pirate world based on the novel Treasure Island.

The ensemble (who almost all play multiple roles) is engaged, lively, and manages to find moments of real truth in the fantastic world. They avoid the over-energized falseness that can so often sink the ship of theatre for young audiences. The show is also enhanced significantly by some beautiful and delicate shadow puppets by Melissa Chernowetz; particularly nice is a boat with lifted sails that appears early in Sam’s fantasy.

Sam’s adventure with Long John Silver (Duane Ferguson) and his crew centers around the search for a buried treasure, lost on an island where they must overcome a variety of challenges and obstacles before facing the dreaded ghost of Blackbeard himself with a climactic sword fight. Fear not though, parents of the meek or easily tearful, the ensemble and the play itself manages to turn even the most potentially scary moment into an unexpected meeting of new friends.

Through these trials, Sam gets a chance to give some great advice about bullying and how to handle big changes. She knows it isn’t always advice she’s followed, but Sam sees how much it helps her new friends. As Sam winds up back in her room just in time for dinner, it becomes clear that the adventure changed her. While we don’t see the new Sam in action on the playground, we can be sure that she knows just how to handle those bullies—no swords required.

Swashbuckling Sam and the Tale of Blackbeard’s Revenge is by Leonora Bernstein. Directed by Stephanie C. Cunningham and Kristin Skye Hoffmann. Lighting Design is by Cate DiGirolamo. Puppetry is by Melissa Chernowetz. Fight Direction is by Alex Cunningham. Production Stage Manager is Zachary Kelley.