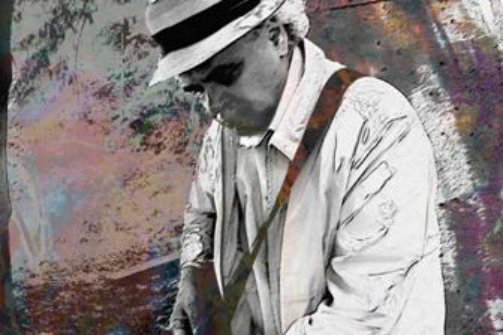 BOTTOM LINE: An intimate, open-mic-style journey through a series of one artist’s what-could-have-beens.

Canadian Clayton Gilchrist (David King) is making his debut at the Huron Lounge in an open-mic session. He's like every older gentleman who's picked up a guitar and learned a few chords and is here to tell a story. Except that he's not. Because in this reality, his father gave him a small guitar as a gift and it was soon broken. But in another, he stowed it beneath his bed, safe from his reckless siblings, and lived the life of a pop star.

David King's one-man show, premiering at FringeNYC, is a musical journey that tells the story of a man who has lived two lifetimes. Before ferryman Clayton Gilchrist retired and took a guitar lesson at the local resort, he lived a relatively normal life—happily married, four grandkids, a job he loved—until a four-note chord progression allowed him to travel to an alternate reality where he lived his wildest musical dreams. In the delightfully grimy Huron lounge, Gilchrist takes the audience through a musical and anecdotal journey of his alternate superstar life: from "Bijou" about the lovely daughter he had with famed lesbians Janis Joplin and Marilyn Monroe, to “Runaway Heart,” the last song he wrote before his famous self’s untimely demise at the paw of a grizzly bear.

Small Guitar is an intimate theatrical experience, the solitary guitar player making eye contact with the audience and once asking to see everyone's thumbs to prove what universe they belong in. King’s performance as Clayton Gilchrist is bumbling and awkward, much like a man who had performed in a past life with George Harrison and yet lacks the skill to do so in this one. It’s a fascinating concept, living two lives, and one that is explored in a unique anecdotal manner. There are no rips in the space-time continuum. There is no traveling through alternate dimensions. And rather than allowing us to see famous Gilchrist’s time in rehab during Warren Beatty’s presidency, he tells us about it, with the air of a paternal figure intent on imparting life lessons. But it’s not all serious business and words of wisdom. Gilchrist walks the audience through humorous moments, from a delightful mimic of his wife’s thick Scottish accent in a “duet” to the minute details of the reality that never happened thanks to a broken small guitar.

Gilchrist's journey through time is quirky and yet told with such nonchalance that for a moment it's easy to believe he lived in an alternate world where people had abnormally long thumbs, JFK was never shot, and Elvis lived until the late 90s. It's an older man's exploration of what-ifs and what-could-have-beens and, even if it's only for an hour, it's nice to imagine with him.

Small Guitar is written and performed by David King.