Sex, Cynicism, and Other Small Miracles 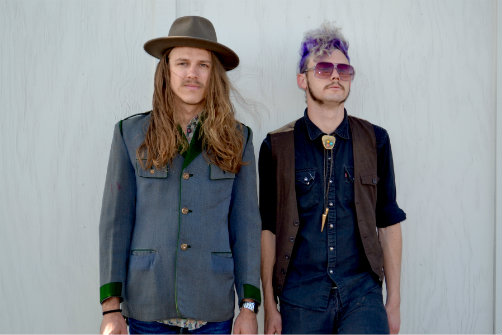 Lachlan the Bray and Garrett Rileyame in Sex, Cynicism, and Other Small Miracles. Photo by Ellen Woodson.

BOTTOM LINE: If you appreciate spoken word and indie rock performed by some articulate and edgy dudes, this jazz-rap/rock/slam poetry concert will keep you guessing and satisfy your hipster urges.

Lachlan the Bray is the Australian Country Boy; Garrett Riley is the Urban Vagrant from the “dismal suburbs of Southern California.” Sex, Cynicism, and Other Small Miracles is the tonally off-kilter result when these two men, and these two backgrounds, collide and decide to collaborate.

The general structure of the show is an alternation between a poem performed by Bray, and a song performed by Riley and the band (which consists of bassist Alex Farrell and drummer Mark Goodwin). However, as the performance progresses, these mediums combine and blend together into an artful wash that really is best described as simply “cool.” It is clear that every performer on that stage is incredibly multi-talented, and each of the men showcases a little bit of everything throughout. This setup evokes a feeling of being at a concert more than a piece of theater, but with Bray’s masterful reign over the internal rhyme and Riley’s folk-meets-alt-rock-meets-country crooning (check out Riley's band Hungry Skinny for more), I mean this as an absolutely positive comment.

As the poetry and music continues, it seems like the piece does not really have a set goal or message other than self-expression. Normally this type of performance can be masturbatory or extraneous, and even though the show has some twinges of narcissism, it can't be faulted for this because the writing is so tight, quirky, and evocative. Bray and Riley take themselves seriously, to be sure, but never too seriously to be alienating or off-putting.

Near the end of the third act, Bray delivers a poem that begins “Montana is the Tijuana of Canada.” His little I-know-something-you-don’t smirk (paired with that charming connecting “r” sound in British and Australian accents that tickles us Americans so) is the perfect summation of the odd humor that dots Bray’s and Riley’s work. “Montana is the Tijuana of Canada” underscored by a rhythmic jazzy bass hook—it's something you never thought you needed to hear, but once you hear it, you will certainly be glad you did.

I honestly could not tell you what Sex, Cynicism, and Other Small Miracles is “about,” other than general themes like disillusionment, disenchantment, social critique…and sex, cynicism, and other small miracles. But I can tell you that I enjoyed every step of the way, and if you like fresh, clever writing full of little zingers with about a three-second understanding delay, then rush to see this well-crafted patchwork of wordplay.

Sex, Cynicism, and Other Small Miracles is written and performed by Lachlan the Bray and Garrett Riley. Directed by Mia Romero. Costume and Scenic Design is by Red Lips Woman Productions, with Strider Patton. Lighting Design is by Jessica Davison. Publicity and Marketing through Spin Cycle NYC. Featuring Alex Farrell on bass and Mark Goodwin on drums.