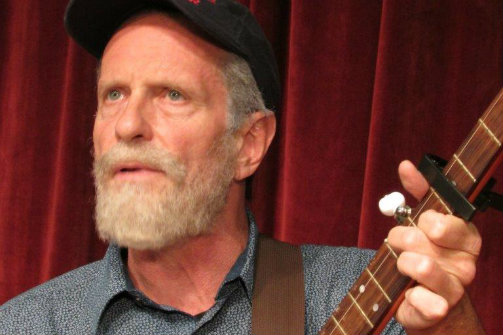 BOTTOM LINE: A sweet show celebrating the late Pete Seeger that functions more as a celebration than a full-fledged story.

If you like singing Pete Seeger songs in a room full of Baby Boomers, this one’s for you! If not, you might want to grab a beer to loosen your inhibitions before descending into The Huron Club, because the majority of your time spent in Seeger is in sing-along. (And if you’re unfamiliar with Pete Seeger’s work, go ask your dad.) Written and performed by Randy Noojin—Seeger’s doppelganger thanks to a great fake beard and a kind disposition reminiscent of the late folk singer—Seeger isn’t much of a play, but it sure is a trip down memory lane.

Set at a gala for U.S.-Cuban Naturalization, Pete Seeger is hired to sing and muse on his own history as an activist for First Amendment rights. Noojin takes us through Seeger’s history as a performer/participant in the Peekskill Folk Festival with Paul Robeson, his interrogation by the House Un-American Activities Committee, and then his advocacy for civil rights, ending the Vietnam War, and clean water. You gotta love nostalgia, but Seeger feels more like a lecture based on Pete Seeger’s Wikipedia article masquerading as a story.

Noojin is too much of a fan of Pete Seeger to really tell his story honestly. In Seeger, there is little nuance to the singer as a personality, nor is there much of a plot. Because Noojin places Seeger on a pedestal, it is almost impossible for him to provide a truthful portrayal of the man. As one example, Noojin attributes “Turn, Turn, Turn” and “We Shall Overcome” almost entirely to Pete Seeger (with a quick mention to a union activist who brought the song to Seeger’s consciousness). However, “Turn, Turn, Turn” is taken from the Book of Ecclesiastes, and more crucially, “We Shall Overcome," an anthem of the civil rights movement, has origins that far predate Seeger's awareness of the song. Indeed, although both songs have a by-line as "traditional" in the program, Noojin seems to have decided that Seeger is essentially their sole creator, putting aside factual history for the sake of histrionics.

Seeger is designed as precious reminiscence; projection design by Lianne Arnold is essentially a PowerPoint depicting the images of the life and times of the singer, and Noojin wears Seeger’s classic baseball cap, a common accessory seen in his last years. But beyond a couple of small details, Seeger relies heavily on the memories of the folk singer-as-legend to complete the image. Therefore, this show is best for those who are familiar or at least grew up with Pete Seeger’s legacy. Noojin isn’t a stand out singer, but he plays the banjo with great care—he even includes quick banjo-related dad jokes in between each sing-along. (What do you say to a banjo player in a suit? Will the defendant please rise!) Seeger is great fun if you know your mid-twentieth-century folk music and are looking for some sweet nostalgia, but if you’re seeking a dynamic story, then this one-man show may leave you wanting more.