Richard III (A One Woman Show) 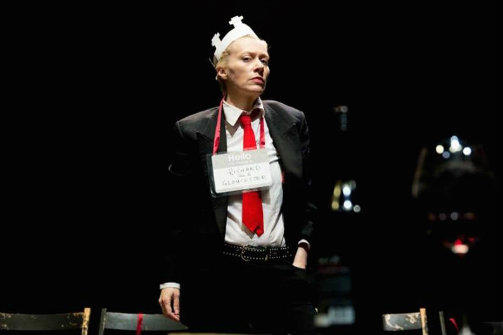 BOTTOM LINE: An interactive journey through one of Shakespeare’s greatest tragedies.

Few theatre companies can pull off Shakespeare’s titanic tragedy Richard III. Even fewer actors can do justice to the part of the regicidal Duke of Gloucester. Miraculously, Brite Theater and Emily Carding have managed to do just that in—of all places—a white, thin-walled dance studio in the depths of the East Village.

This highly-condensed version of Richard III begins with the Duke herself (Emily Carding) helping audience members to their respective seats and assigning them the other roles of the play. That’s right—we make up the English court in this modernized interpretation of Shakespeare’s tragedy. A very minimal production, the set consists only of a single black rolling office chair, a table with a glass of wine, a prayer book, little stickers with the word “DEAD” scrawled on them in red marker, and the chairs that audience members sit in. This is Richard III stripped down to its barest element—the connection between audience and actor.

When Richard and the audience click, it’s electric. Emily Carding has the power to change the tone of the room with just the look of an eye. The remnants of her powerful touch are palpable for hours after contact, as I learned after she declared me “the dead King Henry” and slapped a “DEAD” sticker onto my shirt. I was a little awkward at first, but Carding handled it with elegance and cheeky wit.

Despite her talents, Carding is presented a challenge by such an intense breakdown of the fourth wall. The play has a rocky lift-off, with audience members potentially wondering how much participation is too much participation. At times, it feels like Carding is dragging us along in the play rather than taking the journey with us. As the show goes on, Carding manages to navigate these awkward moments with precision and grace—likely due to the audience members easing into their roles. Her Richard is charming, sinister, conniving, guilt-ridden, and utterly pathetic all at once. This performance is everything that we would want of one of the bard’s greatest villains.

Though it has a bit of a shaky start, Richard III (a one-woman show) is an undoubtedly unique ride through this classic tragedy.

The cast is Emily Carding (and the audience).