THIS SHOW IS PART OF FRINGE ENCORES, PLAYING AT SOHO PLAYHOUSE FROM 9.28 to 10.10.
FOR TICKETS AND MORE INFO VISIT sohoplayhouse.com. 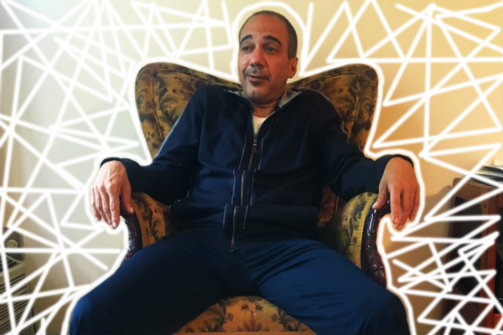 With nothing more than a chair straight out of an old Tennessee Williams set and some very clever projections (courtesy of Paul Antoniades and Joe Osheroff), Evan Zes takes his audience on a whirlwind of a journey through the very true tale of an apartment he once inhabited. New to the big city and trying to make it as an actor, Zes begins to live as a subletter in a rent-controlled apartment. Realizing that the woman who is actually on the lease will never know, Zes puts the apartment on Airbnb while he performs in various regional theatre pieces. As Zes makes more and more money from his rental wheeling-and-dealing, however, it becomes increasingly evident that pride cometh before the fall.

It’s undoubtedly a bit awkward to tell your life story to a room full of strangers, and so it's little surprise that Zes’ piece at first seems like a well-rehearsed monologue rather than a full show. This stiffness quickly melts away, however, to reveal a dangerously hilarious actor/writer with a clear ability to capture an audience. Even as Zes’ actions in-story begin to tend toward the shady, he is so likable that you can’t help but root for his success. It is his performance that makes the piece, in more ways than one. With such a simple set-up, Zes needs to be near perfect in order to maintain interest, a task he easily accomplishes. Most entertaining, perhaps, are his impressions of the various friends and acquaintances who populate his story. There isn’t a one that fails to get a laugh.

Being that this show is so much about an actor’s attempt to survive in New York, the comedy may largely be appreciated by those who work in theatre and entertainment, or perhaps by those with a penchant for real estate. While you might miss some of the jokes if you’re not a member of these groups, Rent Control is still a highly enjoyable piece with a wonderful performer at the helm.