Off Off Broadway, Musical
Runs through 8.20.16
VENUE #2: Flamboyan Theater at the Clemente, 107 Suffolk Street 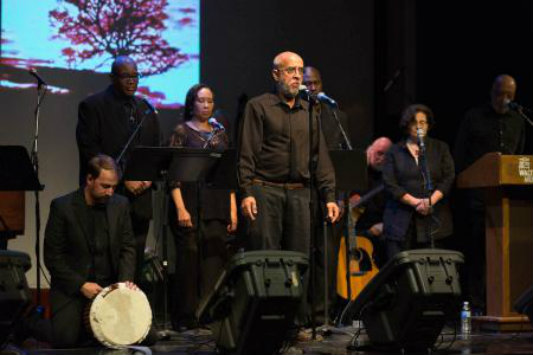 The story of Red Devil Moon is filled with impassioned music that transports the audience to a Southern cane farm in 1920’s Georgia. Cane cutter Louisa (Karen Somerville) is intrigued when she receives a surprise package from her boss’s son Bob Stone (Philip Dutton): silk stockings and a promise to take Louisa away on a train to New York. Conflicted between her feelings for Bob and her long time lover Big Boy (Lester Barret, Jr.), Louisa confides in her friend Thelma (composer Pam Ortiz). Louisa dreams of a life far away from the South, where she is free to love whomever she desires. She demands that Big Boy become a “Whole Man” to win her love.

As promised, Bob waits for Louisa with a train ticket, and is infuriated when she inexplicably flees from him as they are set to leave. Louisa knows that abandoning Bob Stone will have monstrous consequences. Fearing for her life, Louisa demands that she and Big Boy immediately leave for the North. Big Boy’s initial reluctance to leave behind the life he has always known is squashed when Bob arrives to raise hell. The two men engage in a knife fight, knowing that the winner will be the one to run away with Louisa.

In Red Devil Moon, the band and the singers all share one fairly small stage without any distinct separation. The plot of the show is revealed entirely through narration as the singers change positions between two microphone stands. Although I enjoyed the simple staging, the lack of dialogue leaves something to be desired—possibly because the plot has the potential to shine as something more than just narration. I look forward to one day seeing a fully realized production of the forthcoming musical.

The singers of Red Devil Moon, many of who also double as band members, are without a doubt gifted. Their voices fill the theatre, even through microphone and lighting troubles. However, the straightforward delivery and minimal talking allow for the band to be highlighted; indeed, it's the band that is the true star of Red Devil Moon, and at times they even overpower the singers. The band's infectious energy makes it hard to avoid swaying, clapping along, and tapping one's toes. Red Devil Moon ultimately provides an entertaining experience mostly because of the powerful, feel-good music.

Red Devil Moon is by Robert Earl Price and Pam Ortiz, based on the book Cane by Jean Toomer. Lighting Design is by Tess Hogans. Sound Design is by Tim Secrest.  Stage Manager is Michael Wessel. Costume Design is by Barbi Bedell.