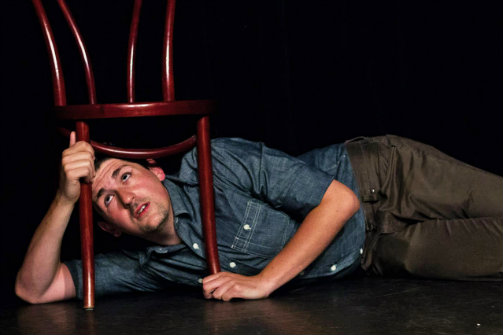 BOTTOM LINE: Randy Reiman’s Attention Span offers exactly what it says on the tin: a hectic flurry of constantly-changing skits, songs, prop comedy, and gags, highlighting the anxieties and joys of distraction in the age of the Internet.

If there is one hallmark of the digital age, it is distraction, and Randy Reiman’s Attention Span rivals the Internet itself with its enormous capacity for chaos. The show flies through topics right out of the gate, opening with a greeting from a Predator drone, then an opening number to “boot up the show,” after which Reiman proclaims himself the “shareable, linkable, bloggable man” in a rapid-fire bit reminiscent of George Carlin’s famous “modern man” monologue. Endless reference and parody remains a theme, befitting the Internet aesthetic. Reiman soon declares that “the only thing worse than a copy of a copy is a song parody,” though most of the (many) songs in the show are parodies themselves. That self-referential attitude carries throughout, as skit after skit flashes before our eyes.

Reiman is a powerhouse, playing himself as the combination of Bo Burnham, Steve Jobs, Carrot Top, and Dr. Seuss, blending genres and styles in a whirling chaos of sketch and spectacle. There is a method to the madness, though. During a diversion to read the news, Reiman is overwhelmed by reports of war, poverty, global warming, and even the possibility of the Large Hadron Collider malfunctioning and engulfing the earth in a black hole. To avoid this modern anxiety Reiman, like many of us, turns to the endless distraction of the Internet.

In the subsequent scenes and with plenty of semi-relevant interludes, a narrative emerges. At one point Reiman plays a dick-pic obsessed U.S. Senator who, seeking to distract from a personal scandal, offers to fund three climate scientists (Joyah Spangler, Amy Lynne Berger, and Polina Feldbein) on one condition: they move their research from warning the world about global warming to building a particle collider. Reiman’s earlier anxiety that such a collider could form a black hole turns out to be foreshadowing, as a malfunction couples with an overeager Senator to create a black hole that engulfs the show, and perhaps the universe itself.

Out of the rubble, R.O.R.Y. the predator drone (Ken McGraw), formerly a meek failure now possessed by the God particle, emerges to rebuild the show through ten “Absolutely Necessary Upgrades.” Like most attempts to add features and monetize an app, the upgrades end up causing more trouble. Eventually, Reiman manages to wrest control of his show from R.O.R.Y.’s HAL 3000-esque takeover, and leaves with newfound appreciations for distraction, focus, and unplugging for a moment.

It is difficult to describe Randy Reiman’s Attention Span in terms of its chronology or narrative, as the show embraces the randomness in its organization as well as its themes. On more than one occasion I found myself wondering “what does this have to do with anything?” In Attention Span’s case, however, this is a compliment. Reiman’s spectacle is a live-action performance of the Internet itself, and it moves at the pace of the digital world while some of the ‘Net’s notable landmarks breeze by. Netflix marks time between scenes as the binge-watch trudges on, browser tabs are opened and closed as achievements are unlocked, and the cast continually deviates to “incognito tabs” in the form of a seedy club where anything goes.

Randy Reiman’s Attention Span certainly doesn’t shy away from spectacle. In the spirit of the Internet, the show carries a thrown-together aesthetic guided by a backing projection to set scenes, award arbitrary achievements, and interject when things start to spiral out. The show sometimes suffers from timing issues between technical elements, music, and choreography, but the energy from the cast and crew is infectious. The many props are delightful as they not only add comedic effect, but designer Alexandra O’Hagan does remarkable things with cardboard for a beautifully slapdash look.

The show’s comedic tactics are extremely diverse, dipping into prop comedy, song parody, one-liners, audience participation, sketch, meta-narrative, and self-deprecation. The music is a highlight, as the parodies pile up with Reiman accompanied by his three scientists as backup. The whole piece doesn't really come together in a cohesive whole, and the overall style gets lost in the endless variety, but perhaps the variety itself is the style. Not every joke lands (or even gets completed), but like the particle collider, the sheer mass of jokes ensures that there is something in it for everyone. Ultimately the show accomplishes its goal, putting the Internet onstage and providing a “dazzling display of distraction” that still manages to make a viewer think...at least until you open a new tab.