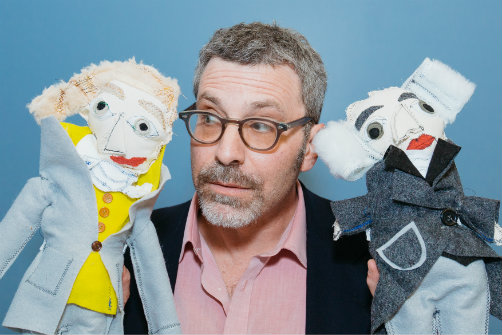 BOTTOM LINE: In 47 minutes, Mike Schlitt will attempt to restore your faith in American democracy.

With an honest message, a few puppets, and a whole lot of sweat, Mike Schlitt is a powerhouse of knowledge and determination in his attempt to reinvigorate the New York Fringe audience’s faith in American Exceptionalism. He begins his show by starting the clock and explaining what he plans to do for the next 47 minutes: restore your faith in American democracy.

Schlitt has an extraordinary sense for straddling the line between genuine connection and performativity. The audience cares about him, and it’s clear he cares about us. Schlitt covers his bases to give the audience the background in American history they probably missed in high school in a way that doesn’t feel like retaking AP Government. The show establishes an open conversation between audience and performer, patriot and government.

Schlitt did not restore my faith in American democracy. But although the show didn’t make me a patriot, for the first time in my life, I want to be. I went into this show anticipating answers, but what Schlitt's show does, what all good theatre does, is teach me how to ask questions better. Patriot Act reminds us that even when his 47 minutes are done, change is always possible, especially when talking about democracy.