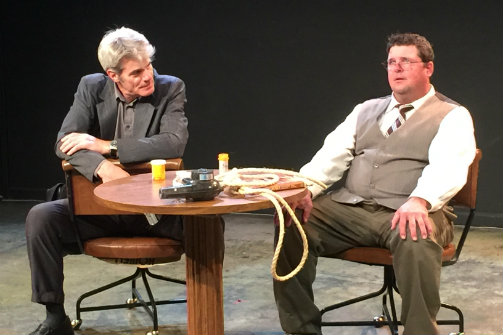 BOTTOM LINE: New Canula is a wacky and enjoyable mixture of The Odd Couple and 'night, Mother, combining unlikely buddies with the threat of suicide.

New Canula opens with the affable J. Dubbs (Gary Cremeans II) turning on some music, slinging a noose around his neck, and cracking open a book on suicide. He is motivated by the losses he endured in the 2008 economic crash, the recent death of his beloved Grandma Betty, and the general lack of direction in life. His plans for dying this evening, however, are interrupted when Bull (David Simpson), a brash bank robber on the run from the police, breaks into his home. While the two appear to be total opposites, they quickly discover that they have more in common than either first thought.

For such a relatively short show, New Canula provides a lot of laughs. From J. Dubbs’ conflict over whether or not it’d be cheating to let Bull kill him, to Bull’s amused disapproval of several of J. Dubbs’ suicide method options, dark comedy is the name of the game, and both Simpson and actor/writer Cremeans undoubtedly have a strong talent for it. The characters’ lack of relationship and the absurdity of their situation makes for some highly entertaining moments in the beginning, but tension quickly fizzles out in the middle portion when Bull and J. Dubbs actually begin to bond. The writing in this section is sometimes a bit matter-of-fact, with exposition and character development often done through telling rather than showing. Still, the actors are both funny enough to maintain the audience’s attention until the show reaches its hilarious, yet nail-biting, climax.

While not perfect, New Canula offers its audiences the promise of an entertaining evening, especially for those who always wished that classic comedies à la The Odd Couple had a darker edge.

New Canula is by Gary Cremeans II. Directed by Mary Bennett. Lighting and Sound Design is by Annikki Larsson.

The cast is Gary Cremeans II and David Simpson.